“In fact, the majority of stars happens to be part of a binary or multiple system, and consequently binary star research covers most areas of stellar astronomy.”

It is important to know that Tycho Brahe never knew about binary systems. The very first binary system was discovered in 1650 by Giovanni Riccioli almost 50 years after Tycho’s death, and only following the invention of the telescope. Therefore, one cannot blame Tycho for failing to notice & identify (within his very own, Tychonic model) the obvious binary nature of his proposed model, which famously featured his highly controversial (and much ridiculed) intersecting orbits of Mars and the Sun.

It was precisely this “bizarre feature” of Brahe’s proposed cosmic model (the intersecting orbits of Mars and the Sun) that triggered the vociferous scoffing and derision of his peers: “Sooner or later, the Sun and Mars must smash into each other!”. As we now know, however, binary systems are the most common stellar configuration in our cosmos. No binary star systems have ever been observed to self-destruct due to a collision between the larger and smaller bodies. I would strongly recommend reading Howard Margolis’ impeccable demonstration that the mentally perceived collision of the Sun and Mars (in Tycho Brahe’s model) has always been an illusion – albeit one that befuddled the entire scientific community for the best part of 400 years. It makes for an exemplary case study of how even the sharpest human minds can be fooled for centuries on end by relatively simple, illusory “tricks” of geometry.

See: Tycho’s Illusion: How it lasted 400 Years, and What that implies about Human Cognition by H. Margolis (1998)

Let us begin with a classic binary star system, as illustrated on the below-linked webpage from the University of Oregon where we can read that the vast majority of the stars in the Milky Way are, in fact, binary stars resembling something like this basic configuration. 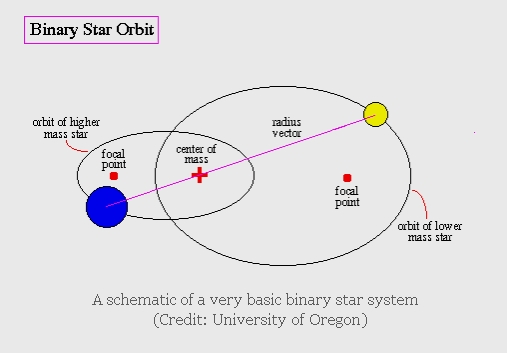 “In fact, 85% of the stars in the Milky Way galaxy are not single stars, like the Sun, but multiple star systems, binaries or triplets.”

— Binary Stars by Jim Schombert (2018) for University of Oregon Astronomy 122: Birth and Death of Stars

As discovered only in recent decades, the vast majority (up to 85% and counting) of the stars in our skies — all of which we perceive with our naked eyes only as a single object — are in fact binary systems (i.e.; two or more celestial objects). In fact, this percentage is growing by the day thanks to advanced spectrometers and so-called Adaptive Optics (based on the Shack-Hartmann principle). The latter have, in later years, spectacularly improved the ability for observational astronomers to detect binary / double stars.

Needless to say, if it eventually emerges that 100% of our visible stars are locked in binary systems, our “lonely” single-star system (as per the Copernican model), would increasingly stand out as a uniquely exceptional, one-of-a-kind cosmic anomaly. It therefore stands to reason, from a purely statistical perspective, that our own star is likely to be part of a binary system.

Here’s an exemplary illustration of the intersecting orbits of a binary system:


Now, Alpha Centauri A and B are both fairly large celestial bodies. But more often than not, the “B-companions” in binary systems are far smaller and dimmer than their “A” hosts and/or simply too close to their larger companion to be easily discernible.

Here’s a brief selection of quotes about binary stars from various astronomy sources:

“Binary stars are two stars orbiting a common center of mass. More than four-fifths (80%) of the single points of light we observe in the night sky are actually two or more stars orbiting together. The most common of the multiple star systems are binary stars, systems of only two stars together. These pairs come in an array of configurations that help scientists to classify stars, and could have impacts on the development of life. Some people even think that the sun is part of a binary system.”

Would you be surprised to know that the idea that the Sun is part of a binary system is not a new concept? The Binary Research Institute headed by Walter Cruttenden has been looking into this hypothesis for many years. Unfortunately, their reasoning-process is stuck in the Copernican heliocentric paradigm, and thus, their ongoing search for the Sun’s elusive binary companion has never considered Mars as a possible candidate. Their current, favored candidate (for a binary companion of the Sun) appears to be Sirius. Sirius, however, is itself a binary system (Sirius A and B revolve around their common barycenter every 50.1 years). Nonetheless, Cruttenden (et al) have made a great job demonstrating, in methodical fashion, that the so-called “Lunisolar” theory (i.e.; Earth’s purported “wobble” around its axis) is utterly untenable. But more about this later. You have probably noticed by now that I’ve suggested the body we know as planet Mars is our Sun’s binary companion. Is this an unreasonable suggestion? I would argue, “No.”

The below spirographic (or trochoidal) patterns are from a fairly recent study (2010) concerned with the “barycentric motion of exoplanet host stars”. In the TYCHOS model — as we shall see — the paths of Mars, Venus and Mercury all bear some resemblance to these complex & beautiful orbital patterns that modern astronomers are observing nowadays in binary star systems.

Above — from p. 6 of The barycentric motion of exoplanet host stars by M. A. C. Perryman and T. Schulze-Hartung (2010)

Indeed, one may justly wonder why our very own “Solar System” would not feature orbital patterns remotely similar to those above. Why would objects swirling around other stars than our own (the Sun) trace such charming & “creative” paths — as opposed to the dull & orderly elliptical orbits of our planets and moons (as in the heliocentric Copernican model)? Are we earthlings just … out of luck?