Earlier on we saw how Mars has a distinctive 79-year cycle within which it returns to the same celestial spot. It turns out that, according to modern-day researchers of solar activity, the Sun also has a 79-year cycle! According to Theodor Landscheidt’s studies, the cycle of solar activity is related to the sun’s oscillatory motion about the center of mass of the solar system.

Above — from Swinging Sun, 79-Year Cycle, and Climatic Change by T. Landscheidt from Journal of Interdisciplinary Cycle Research (1981)

Theodor Landscheidt (1927-2004) was a controversial figure within mainstream science circles. This is unsurprising as he remained throughout his lifetime a staunch critic of the highly propagandized “anthropogenic (man-made) global warming” theories promoted by Al Gore, Bill Nye, et al. His Wikipedia page curtly describes him as a “German author, astrologer and amateur climatologist”.

Landscheidt is held in the highest esteem by many independent astronomers and climatologists who have noticed that our Earth’s climate is correlated to the periodic fluctuations of solar activity, which themselves depend on the Sun’s observed oscillations around the “center of mass of the planetary system (CM)” – to use Landscheidt’s own words.

Now, as their theory goes, this observed oscillation of the Sun would be caused by the gravitational pull of the larger planets of our system (Jupiter, Saturn, Uranus, Neptune). Some say that even Mercury and Venus may be involved in this collective “solar nudging”. Oddly enough, Mars – and Mars only – is never mentioned in their papers, despite Landscheidt’s discovery of the Sun’s peculiarly synchronistic 79-year periodicity. 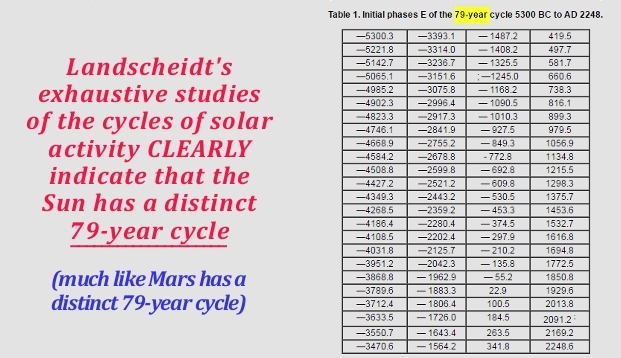 Interestingly, Landscheidt also points out in his above-linked study that the Sun’s nucleus and CM (center of mass)

Landscheidt’s study features the below, well-known diagram plotting the Sun’s observed oscillation around its own CM. I have borrowed and modified his diagram to highlight the fact that the Sun’s CM returns to the same place in approximately 39.5 years. Since the Sun and Mars are locked in a 2:1 orbital ratio, it would stand to reason that the Sun exhibits a 39.5-year period of its barycentric wobble, while Mars exhibits a 79-year (39.5 X 2) orbital cycle. Much as the Sun revolves twice for every Mars revolution, the Sun’s center of mass revolves twice for every 79-year cycle of Mars. 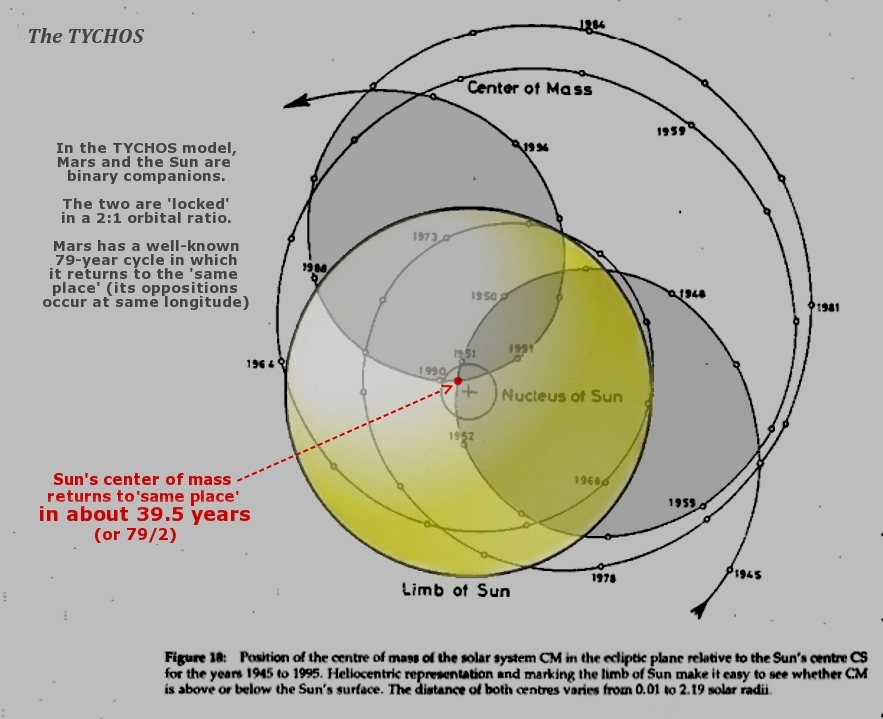 Above — graphic from p. 44, Sun-Earth-Man: a Mesh of Cosmic Oscillations by Theodor Landscheidt (1989)

Landscheidt’s caption for the graphic reads (my bolds):

“Master cycle of the solar system. Small circles indicate the position of the center of mass of the planetary system (CM) in the ecliptic plane relative to the Sun’s center (cross) for the years 1945 to 1995. The Sun’s center and CM [Center of Mass] can come close together, as in 1951 and 1990 [ed- i.e. ca. 39.5 years] or reach a distance of more than two solar radii.”

— The Golden Section: A Cosmic Principle by Theodor Landscheidt (1993)

Both Landscheidt’s 79-year solar cycle and the apparent 39.5-year periodicity of the Sun’s wobble around its CM would go to support the TYCHOS model’s main contention that the Sun and Mars are a binary duo.

Other independent authors in addition to Landscheidt have also detected a peculiar “80-y / 40-y” periodicity (an approximation of the TYCHOS’ 79-y / 39.5-y periodicity) in relation to the Sun’s barycentric dynamics and what is described as “the solar angular momentum inversions”.

“We apply our results in a novel theory of Sun-planets interaction that it is sensitive to Sun barycentric dynamics and found a very important effect on the Sun´s capability of storing hypothetical reservoirs of potential energy that could be released by internal flows and might be related to the solar cycle. This process (which lasts for ca. 80 yr) begins about 40 years before the solar angular momentum inversions, i.e., before Maunder Minimum, Dalton Minimum, and before the present extended minimum.”

Indeed, tell-tale clues pointing to a Sun-Mars binary system can be found across a wide range of cosmological studies. We shall now see how even our Main Asteroid Belt is an indication of the binary nature of our Solar System.