In the TYCHOS, the solar day is accounted for and explained as follows. After one revolution around its axis, Earth realigns with a given star in 1436 minutes (or 23 hours 56 minutes). However, during that time, the Sun has moved along “Eastwards” in relation to the stars. Hence, an earthly observer will have to wait another 4 minutes (or more precisely, 3.93 minutes on average) to realign with the Sun.

You may agree that the TYCHOS model accounts for the solar & sidereal days in the simplest imaginable manner. As we shall see further on, the Copernican theory’s explanation for the solar and sidereal days is not only complicated; it is inherently unphysical, along with the heliocentric model in general.

Wiktionary’s definition of “unphysical”: Not supported by, or contrary to, the laws of physics.

This fact alone strongly suggests that it is indeed the Sun (and not Earth) that moves each day by 2,573,426 km (see Chapter 21 Sun data). As it is, this value equals approximately 2X the Sun’s diameter of 1,392,000 km. Since the Sun’s apparent size in the sky subtends approx. 0.5°, it makes perfect optical sense that its observed displacement from one day to the next amounts to about twice its visible diameter — that is, approximately 1°. 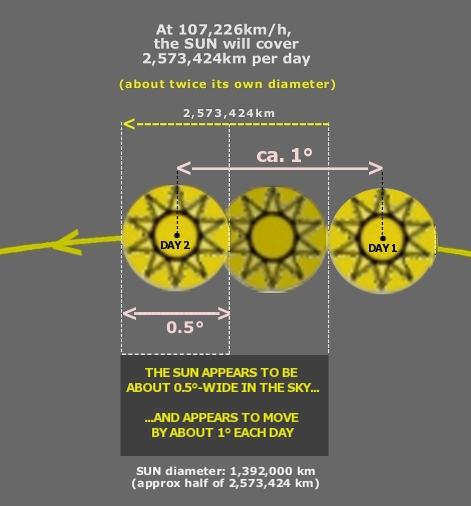 Let us now verify if the notion that the Sun orbits around Earth (and not vice versa) can be further confirmed.

The Sun’s orbital circumference is 939,943,910 km. Thus, the number of Suns that could hypothetically be lined up side-by-side around its own orbit would be:

If we divide this value by 365.25 (and so we should since this is the number of days making up our current count of 1 solar year), we obtain:

These values are naturally just reconfirmations of the known speed of the Sun around its known orbital size, checked “forwards and backwards” to demonstrate that it all fits together well.

To those who still think that Earth orbits around the Sun (and not vice versa), I suggest that the time has come to reconsider. Let us presently see how much the Sun moves as it drifts by 1 arcsecond, as seen from Earth. As we divide the Sun’s orbit circumference (939,943,910km) by 1,296,000 arcseconds (360°) we obtain:

Long after I performed the above, very simple calculation, I was pleased to read on Wikipedia’s “Angular diameter” entry that

“an object of diameter 725.27 km at a distance of 1 AU [average Earth > Sun distance] will have an angular diameter of one arcsecond”

Let’s compute how many kilometers of the Sun’s orbital circumference will be subtended in our ACP of 51.136 arc seconds:

This is excellent confirmation of our estimate of 37,087.424 km for the annual radial offset of the Sun’s position (caused by Earth’s yearly 14,035.847-km-motion) against the starry background. As we calculated in the previous chapter, our estimate is about 0.0039457% of the Sun’s orbital circumference.

Remember, we measure our celestial sphere by means of a spherical ruler divided in 1440 minutes or 24 hours.

Once more, it would seem that our 25344-year reckoning of the Great Year holds up quite nicely.

On the other hand, let us unpack how the solar & sidereal days are explained by the Copernican heliocentric theory.

Solar versus Sidereal Day as of Heliocentric theory

Here follows a classic diagram illustrating the proposed Copernican explanation for the different lengths of the solar and sidereal day. Keep in mind that Earth is supposedly traveling for over 2.5 Million km every day (!) while no parallax whatsoever between the Sun and the stars is observed. This would be measured at the completion of one sidereal day, and yet this parallax is absent. Once again, the Copernican explanation for this undeniable fact is that “the stars are almost unimaginably distant”. However, as we take a closer look, this proposed explication doesn’t make physical / optical sense.

Here’s how the occurrence of the sidereal day and solar day (or “civil day”) is conventionally illustrated. 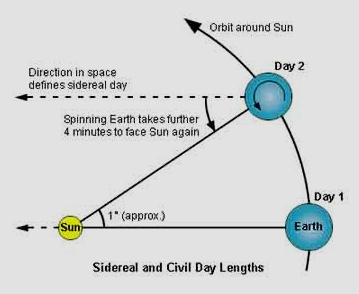 Above — source: The Solar and Sidereal Days by “A-star Maths/Physics Tuition/Tests/Notes”

In the above graphic, Earth is supposed to have moved 2.5 Mkm between the positions of “Day 1” and “Day 2”. Let us examine what this classic Copernican diagram is trying to say, quite carefully.

To think that Earth would be moving by over 2.5 Million km each day without the background stars drifting by any noticeable amount besides these last 4 minutes of earthly rotation has to be among the most surreal aspects of the Copernican model.

To put this problem into due perspective, let´s see how the sidereal and solar day unfold in the below 3-frame sequence.

The following description is what is observed, in reality, from one day to the next:

In 23h 56m, an earthly observer will line up again with the same given star. At such a point and time, the Sun will already have moved Eastwards by approx. 4 minutes of RA. Four minutes later, we see the stars drifting by 4 min. of RA Westwards.

Ergo, the entire amount of our daily, Westward stellar drift will appear (to an earthly observer) to occur in the last 4 minutes of earthly rotation. In other words, Earth might just as well be stationary while only rotating around its axis. Many astronomers in ancient times understandably believed this to be true. This wasn’t because they were stupid, but because this is what matches careful and patient observation of the behavior of the heavens.

Of course, the TYCHOS model submits that Earth moves by a mere 38.4 km per day, which is hardly a noticeable amount of lateral displacement to the naked eye! Those 4 min. of RA are the consequence of Earth having rotated by 360° in 23 hours 56 minutes, thus needing another 4 minutes to line up again with the Sun. Meanwhile, the Sun has been moving Eastwards by approx. 4 minutes of RA.

But the Copernican theory would have you believe that Earth is moving each day by 2.5 Million kilometers with no amount of the observed, daily 4-minute stellar drift that can be optically attributed to this distance. It is as if the Earth’s rotation is the only thing that changes the star positions, but Earth’s (supposed) 2.5-Mkm daily displacement has no effect.