The Copernican model offers yet another incredibly convoluted “explanation” for this major conundrum. If you are not familiar with it, you may read all about it in Wikipedia type sources, but here is a compilation of example data from an Arizona State University professor of philosophy (Michael J. White).

In any case, here is a most pertinent question (highlighting this particular riddle) raised by the Binary Research Institute:

“Sidereal vs. Solar Time: Why is the delta (time difference) between a sidereal and solar day attributed to the curvature of the Earth’s orbit (around the Sun), but the delta between a sidereal ‘year’ and solar year is attributed to precession? […] The burden of proof lies with those who support the current lunisolar precession theory which requires a different explanation for the two deltas.”

— Understanding Precession of the Equinox: Evidence our Sun may be part of a long cycle binary system by Walter Cruttenden and Vince Dayes (2003)

Let us first take a look at these 20.41 min. which, in fact, represent the time difference between a solar and a sidereal year.

Average duration of a solar (or “tropical”) year:

Average duration of a sidereal year:

Earlier on, we determined that our ACP (Annual Constant of Precession) amounts to:

My next graphic should help visualizing why a small portion (about 1.68% in our epoch) of the equinoctial precession will always remain unobservable from Earth. The reason for this “hidden” angle of precessional drift (which increases over time) is something that, yet again, can be demonstrably attributed to Earth’s yearly 14,035.847-km motion.

It thus becomes plainly evident what causes this 20.41-min. difference between the solar and sidereal year: it simply represents the extra time needed for the Sun (as viewed from Earth) to line up again with a given star, after the completion of a solar year. These 20.41 minutes will effectively reset the Earth-Sun-Stars alignment which, in actuality, has been offset by Earth’s yearly motion. 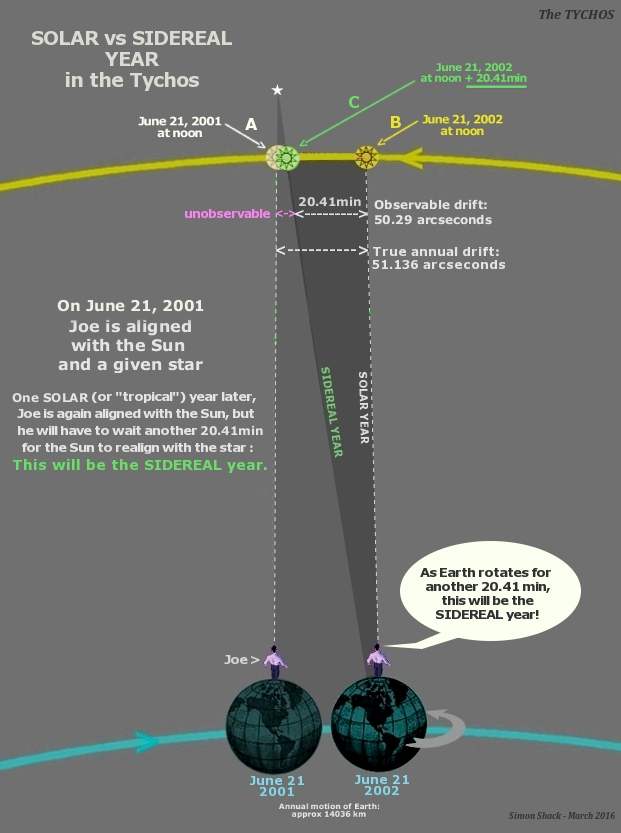 Let me describe in due detail the above graphic by using the solar positions marked A, B and C:

Note that our earthbound Joe will not realize the full extent of the true annual stellar precession; a small portion of it (currently ca. 1.68%) will remain unobservable to him. This, because Joe is unaware of Earth’s 1-mph-motion and he therefore (wrongly) believes that Earth has returned at the same physical place as the previous year. Joe will thus conclude that the annual stellar precession rate amounts to 50.29” instead of the true constant rate of 51.1” per year (our ACP).

The TYCHOS model thus explains why the sidereal year is, in all logic, longer than the solar year.

Thus, the ratio between the observed stellar precession (Sun vs. stars) and Earth’s rotational motion is, as would be expected, circa 1 : 365.25.

Later on (in Chapter 30) we shall see why the rate of increase of the equinoctial precession is observed to grow over the centuries — due to the less-than-optimal year count of our current Gregorian calendar, which lets the Sun drift too much Eastwards over time.

About the “anomalistic year”

Astronomy describes the so-called “anomalistic year” as follows (the below is from Wikipedia).

The oddly-named “anomalistic year” (the period in which the Sun returns to its closest or furthest point from Earth) lasts on average for 365.259636 days. Incidentally, this is approx. 4.7 minutes more than the sidereal year of 365.256363 days. It is defined as “the time interval between perihelion passages”.

In short, the “anomalistic year” is defined from Sun’s perigee procession, and lasts for about 4.7 minutes longer than a sidereal year. We see that in the course of 4.7 minutes a given point on Earth’s equator will rotate (within the terrestrial rotational reference frame) by 4230”. This is because 1 minute of our celestial sphere of 1440 min. (24 hours) corresponds to 900 arcseconds.

Now, let us imagine two hypothetical signposts (“A” and “S”) being moved around Earth’s equator year by year with the following parameters.

Signpost “A” is kept pointing towards the celestial spot of each year’s passage of the Anomalistic year.

Signpost “S” is kept pointing towards the celestial spot of each year’s passage of the Sidereal year.

Since signpost “S” is conceptually always being kept oriented towards a given fixed star (in this thought exercise we disregard Earth’s daily rotations around its axis), it will complete 1 revolution around Earth’s equator in 25344 years.

On the other hand, signpost “A” will be moved each year by an extra 4230” (arcseconds) in relation to signpost “S”.

Since we know that signpost “A” moved by 4230” annually, we can now find out by how much signpost “S” was moving annually:

Hence, the so-called “anomalistic” year (which is observed to be 4.7 min. longer than the sidereal year) further corroborates our Annual Constant of Precession of 51.1 arc seconds (representing Earth’s 1-mph-motion as posited by the TYCHOS model).

We may further confirm our ACP by using the value of 11.75” arcseconds, which (as described in old astronomy books) is the observed annual amount of precession of the Sun’s apogee measured from Earth:

— p.48, The Elements of Astronomy: Designed for the Use of Students in the University by Samuel Vince (1811)

To complete a full 360° precession around our system the Sun’s apogee will therefore need:

*Here is an odd comment about this period, from a less accurate perspective:

“The perihelion of the earth’s orbit, and of all the planets, is moving around the sun, and completes its revolution in 111,000 years.”

Note the underlying absurdity of the above sentence. Why would the perihelion of Earth ”and of all the planets” share such a period, and return to a respective perihelion in unison? It is obviously the motion of the Sun’s orbit that has this periodicity and not the other way around.