You may have asked yourself at some stage in your life, “How can our calendar possibly have an integer value of 365 days (or 366 days on a leap year) whereas, on the other hand, we are told that one year lasts ca. 365.25 days or 365 days and 6 hours?”

My below sequence shows ad absurdum the implication of the well-known notion that “a year actually lasts for 365.25 days”.

Obviously, we do not end up skewed by 6 hours at the completion of a year. Thus, we may legitimately ask ourselves, “Where do these 6 hours come from?” Can the Copernican model account for them, and can the reason for their existence be visually illustrated in a heliocentric Copernican graphic? The short answer to this question is: No.

On the other hand, the TYCHOS model can illustrate the probable motive for astronomers to have stipulated that a year lasts for about 6 hours (or ¼ of a day) more than 365 integer days. 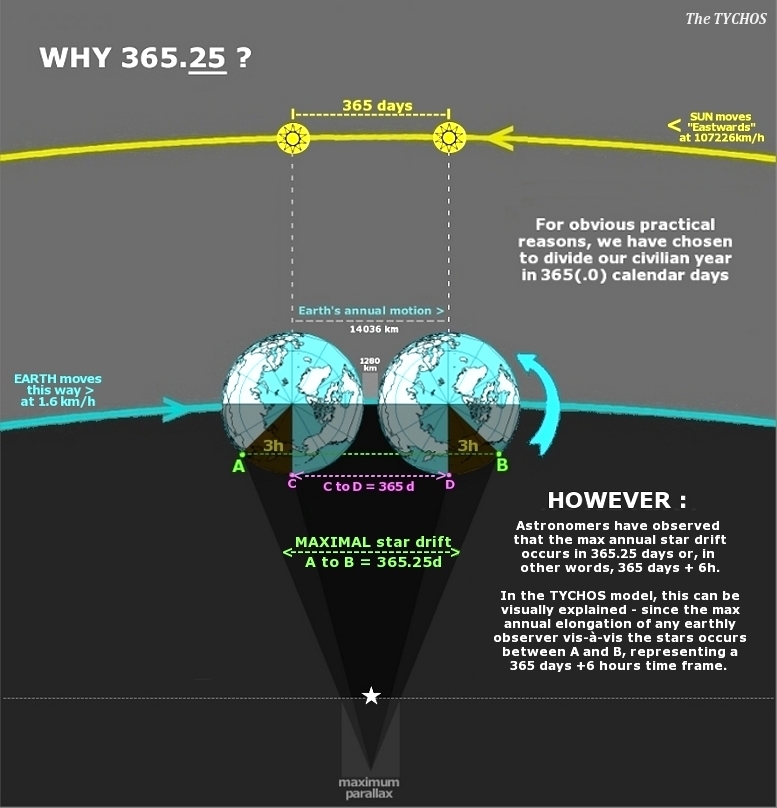 Astronomers have observed over the centuries that the maximal annual displacement of a given star on the ecliptic (currently 50.29” arcseconds per year) occurs between point “A” and point “B” (as marked in my above graphic). So, every year, 6 hours are considered to be “lost in space”. Therefore, they have concluded that “one sidereal year lasts for 365.25 days” (or more precisely 365.25636 days).

However, we may also read in Wikipedia’s entry on the “Sothic cycle”:

“The Sidereal year of 365.25636 days is only valid for stars on the ecliptic (the apparent path of the sun across the sky).”

Now, every calendar year (of 365 days), we see the Sun “slipping backwards” against the starry background by about 1 minute of RA. Every four years, this adds up to about 4 minutes of “lost ground” on the part of the Sun. 4 minutes is just about the same amount of RA that the Sun advances by each day (more precisely, 3.93 minutes). Therefore, by (the Gregorian calendar’s) convention, one extra leap day, February 29, is added to make up for the Sun’s lost ground.

As viewed under the TYCHOS model, this makes perfect sense. Since the Sun travels at 107,226 km/h, in 3.93 minutes it will cover a distance of approximately 7023 km which is about half the distance traveled by Earth annually (approximately 14,035.847 km). This means that, every 4 years, the Gregorian calendar’s leap-day-gimmick allows the Sun to “regain” about half of its accumulated offset caused by Earth’s motion. 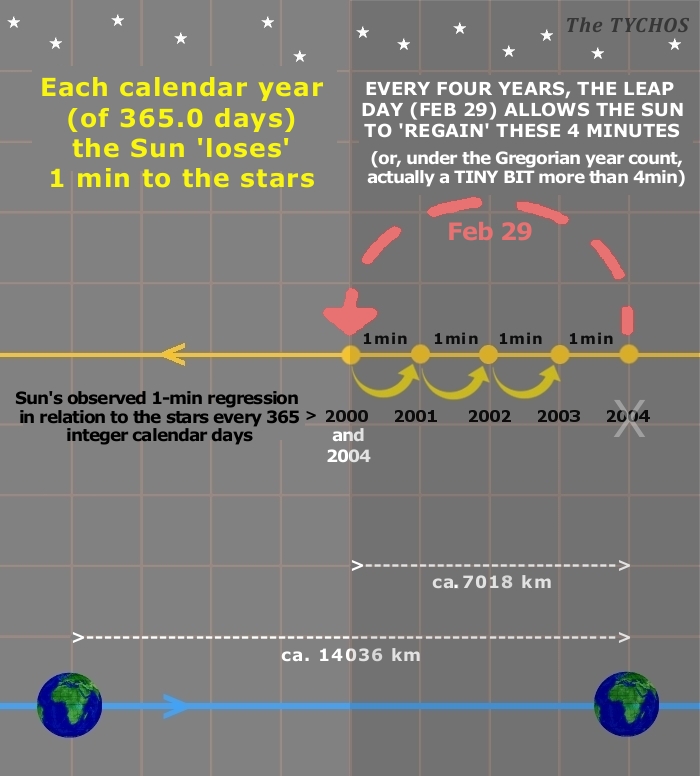 Now, here’s the thing – This forward leap (of 7023 km) conceded to the Sun every four years by our current Gregorian year-count is a tiny bit too long. It will therefore slowly, over time, let the Sun drift too far Eastwards (i.e.; in the opposed direction of Earth’s motion). This will eventually (in 25344 years) cause the Sun to end up on the opposed side of Earth at the wrong time of the calendar, thus flipping our seasons upside down. I will illustrate this in more detail in Chapter 32.

What should be mentioned before we get on is that, due to the currently imperfect yardstick with which we have defined the duration of one day (as tuned with our “atomic” clocks) and thus of one year we cannot divide our great year in 25344 exact slices of 365 integer days.

That is to say, our current Gregorian calendar’s definition of one solar year (365.24219 days) is a bit too long to keep the Earth and the Sun synced throughout their respective 25344-year journeys. Whereas using an integer 365-day year count (by our current definition of a day) would be a little too short. We shall soon see why our years should ideally last for a “middle-of-the-road” value of 365.22057 days. This will ensure that the Sun never “slips” out of sync with Earth during the course of its 25344-year journey around its PVP orbit.