In the TYCHOS, our Moon turns out to have the most revealing period of 29.22 days, which I will henceforth call the Moon’s True Mean Synodic Period (TMSP). As mentioned earlier, this figure provides us with the spectacular indication that our Moon plays a central role in our Sun-Mars binary system. This stands in stark contrast to the Copernican notion that the Moon is just a peripheral appendage circling around Earth. If that were the case, why would all of our system’s celestial bodies in the Copernican scenario exhibit exact multiples of Moon’s average synodic period of 29.22 days? Let us now review the crucial point of determining this figure.

As mentioned earlier, there is no conceivable reason, within the Copernican model, for our lunar satellite to interact with Mercury, the Sun, Venus, Mars and Jupiter at such exact multiple orbital resonances of 1 : 4 : 12.5 : 20 : 25 : 150. Review once more my table for the planetary orbits:

Our Moon is ostensibly at the center of our system in the capacity of some central driveshaft for its cosmic companions.

Yes, that is indeed what an earthly observer may hastily conclude. Yet, that value will depend on the particular time-window chosen to compute the Moon’s synodic period. Therefore, only by spending centuries of careful observations will a correct average value of the Moon’s synodic period be obtained. That is just what the meticulous Aztecs appear to have done, as their famed Toltec Sunstone suggests.

“To summarize, then, the Toltec Sunstone is an image of the motion of Venus, consisting of two hundred sixty, 8-year, periods, divided up into forty 52 year periods, as encoded in the ring of 40 quincunxes surrounding the ring of 20-day names. Each 8-year period of 2922 days is counted by a rotation of the 20 day-sign ring, where each day-sign actually represents one month of 29.22 days. Therefore, one complete revolution of the day-sign ring counts 20 x 29.22 days, or the average Venus year of 584.4 days. Five of these revolutions, each uniquely named in the center quincunx, counts 100 x 29.22 = 2922 days, or five Venus years of 584.4 days each, which is equivalent to eight years of 365.25 days each. By assigning the 20 day-sign symbols to a lunar month of 29.22 days, each month of the Venus year has a unique name, just as the twelve months of our Earth year has, making it easy for the public to mark the months, or ‘moons,’ as they went by.”

Therefore, one average “Long ESI” (Empiric Synodic Interval) of the Moon will compute to:

Whereas if you choose a time window of 19 years (a well-known time interval, the Metonic cycle, at both ends of which the Moon will realign with the Sun), you would conclude that moon’s average period is 28.91 days.

But the smart Aztecs probably knew better to average the Long and Short ESIs in order to obtain the more accurate (over longer time periods) True Mean Synodic Period:

The Moon also has a little-known 8-year cycle in which it very nearly realigns with the Sun every 2922 (+1-2) days.

In conclusion
29.22 days is our TMSP (True Mean Synodic Period) of the Moon. The higher and lower observed values of the Moon’s synodic periods (29.53 days and 28.91 days) are just seasonal fluctuations caused by the collective 1-mph-motion of Earth and the Moon as they jointly advance along the PVP orbit. Since the Earth-Moon system revolves in the opposite direction of the Sun, their respective revolutions will be opposed or co-directional, depending on the time of year. The “acceleration/deceleration” illusion of the Moon is thus created. 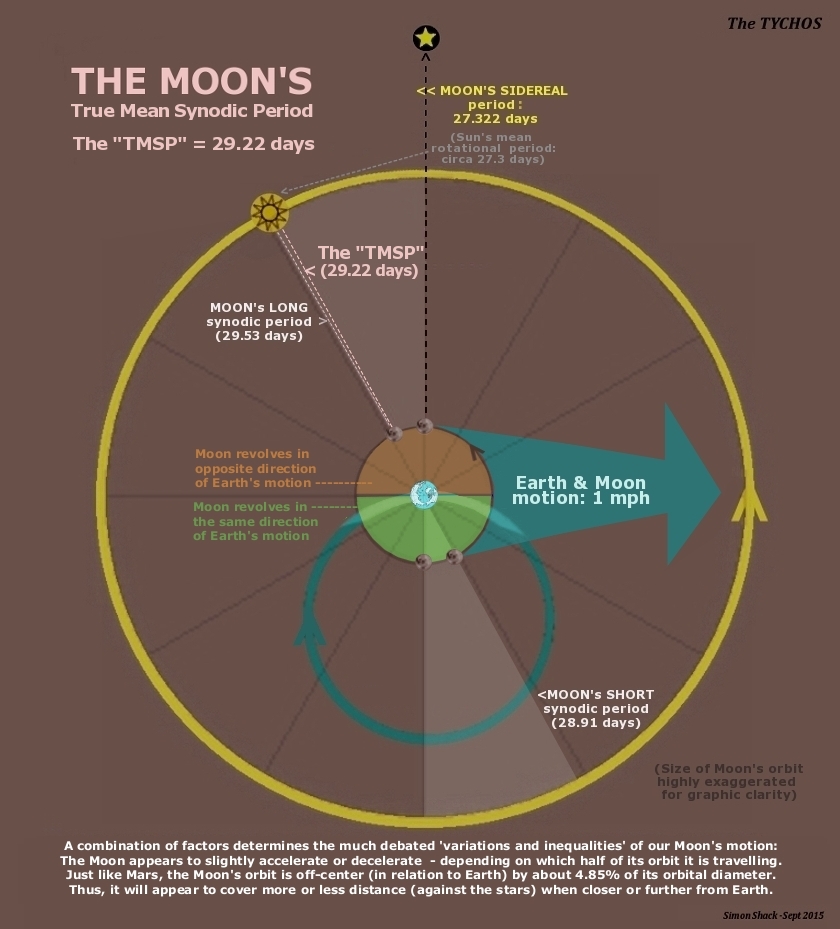 Note that the Sun’s mean rotational period is also circa 27.3 days. This is close to the Moon’s sidereal period of 27.322 days. In other words, the Sun rotates once around its axis in roughly the same time that the Moon revolves once around Earth!

“The Carrington rotation number identifies the solar rotation as a mean period of 27.28 days, each new rotation beginning when 0° of solar longitude crosses the central meridian of the Sun as seen from Earth.”

Observe that the Moon’s TMSP corresponds to the same 8% ratio of both Earth’s and the Sun’s orbital motions in the same time period. Moreover, the fact that the TMPS equals 4% of Mars’s orbital motion (as opposed to 8% of the Sun’s motion) provides further evidence that the Sun and Mars are, in fact, two binary companions ”interlocked” at a perfect 2:1 ratio.

Keep in mind that if Earth and the Moon truly traveled together around the Sun at 107,226 km/h they would both move by about 70 Million kilometers every 27.322 days. Yet, in observation, our Moon lines up with the very same star each and every 27.322-day-period.

As we take a good look at the Moon’s sidereal period (of 27.322 days) through the lens of the Copernican model (which has Earth and the Moon circling the Sun around a 300 Mkm-wide orbit) we see that, once again, it miserably fails the reality test.

Let us compare its premise to a narrative situation that we can easily relate to:

Imagine a prisoner held on a ship which perpetually “hangs a left” as it travels around a huge, circular route, in a counter-clockwise direction. It takes as many as 365.25 days for the ship to complete this circle (the poor prisoner can sense that the ship is circling at a certain speed). His only equipment is a magnetic compass. One night, the fog clears and this hapless sailor sees a distant lighthouse starboard and somewhat ahead and estimates the lighthouse is due North of the middle of this ship’s circular path. He really wants to figure out how long it takes for the ship to complete its circular journey. So he checks his compass and faces himself exactly North, raises his forefinger in front of his nose, and patiently waits for the lighthouse to align with his finger. After it aligns for the first time, he counts the days it takes for the lighthouse to return aligned with his Northward-pointing finger.

Should we expect our sailor to see that lighthouse regularly lining up with his finger every 27.322 days?

Of course not. Yet, this is exactly what is implied by the Copernican model! 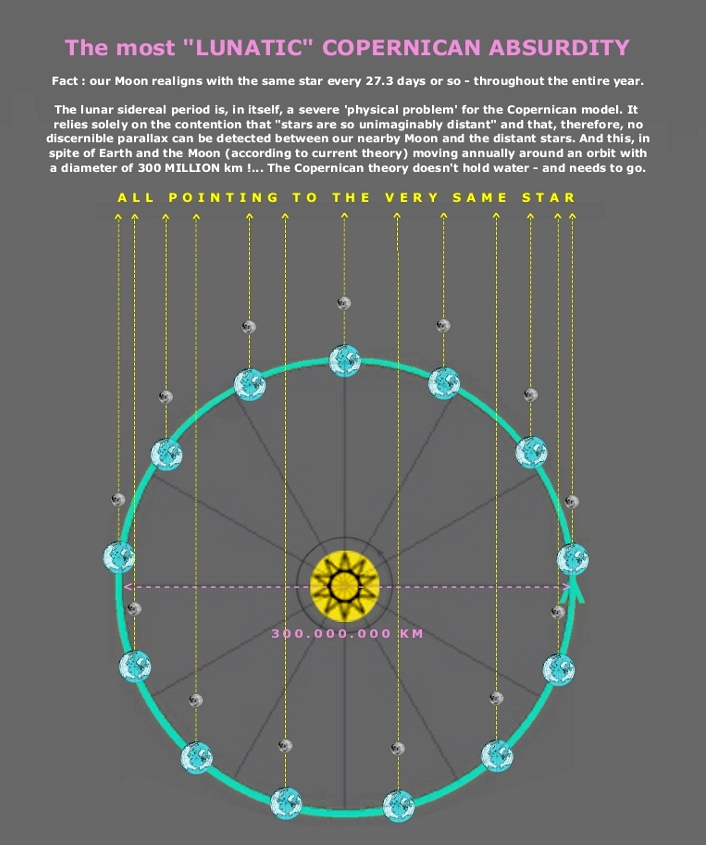 To make this major Copernican absurdity very clear, here is how the SCOPE Planetarium depicts the solar eclipse of March 20, 2015 (which I personally viewed from Rome) compared to a successive position of Earth & Moon (27.3 days later, on 16 April, 2015):

In fact, the entire Copernican theory relies on the misconception that “very distant stars will not be affected by parallax.”

Allow me now to state the obvious with regards to the fundamental optics & physics associated to the very concept of parallax:

No. A relatively nearby object (such as the Moon) cannot possibly remain aligned with any distant star in line of sight whilst both the observer and the nearby object drift laterally for several million kilometers. It does not matter how distant the star may be.

It is truly astonishing that the Copernican theory has survived, largely unchallenged, for as long as 400+ years.

About Lunar and Solar Eclipses — the Saros and Exeligmos cycles

— from Wikipedia on “Saros astronomy“

Now, the 18-year Saros cycle is just part of a longer more complete Triple Saros cycle of 19,756 days. This is known as the “Exeligmos” (Wikipedia link).

“The Mesopotamians, and in particular the Babylonians, were one of the first civilisations to keep records of their astronomical observations. Because of this, they were also the first to notice a remarkable pattern: that eclipses of a particular type are repeated every 18 years, and more closely repeated every 54 years. The 18 year period became known as the Saros, and the 54 year one as the Triple Saros or Exeligmos.”

— On the Saros by Kevin Clarke (1999), InconstantMoon.com

As a 54-year Exeligmos is completed, our Moon returns to its start position, which means that a lunar or solar eclipse will recur over almost the same geographic region as it did 54 years earlier. It is highly important to note that at the completion of one Exeligmos the eclipse will return to a place positioned 90 minutes earlier in our celestial sphere.

That is, the Moon will gain exactly 1/16th of a full revolution of right ascension (RA).

When we consider Earth’s 1 mph motion, it gets really interesting. The distance covered by Earth and the Moon, in unison, in the course of a 54-year Exeligmos cycle, turns out to be very close to the orbital diameter of our Moon (ca. 763,000 km).

This is just about 3800 km shorter than the Moon’s orbital diameter. However, one may reasonably consider that this discrepancy may be accounted for by the diameter of the Moon itself (3476 km). 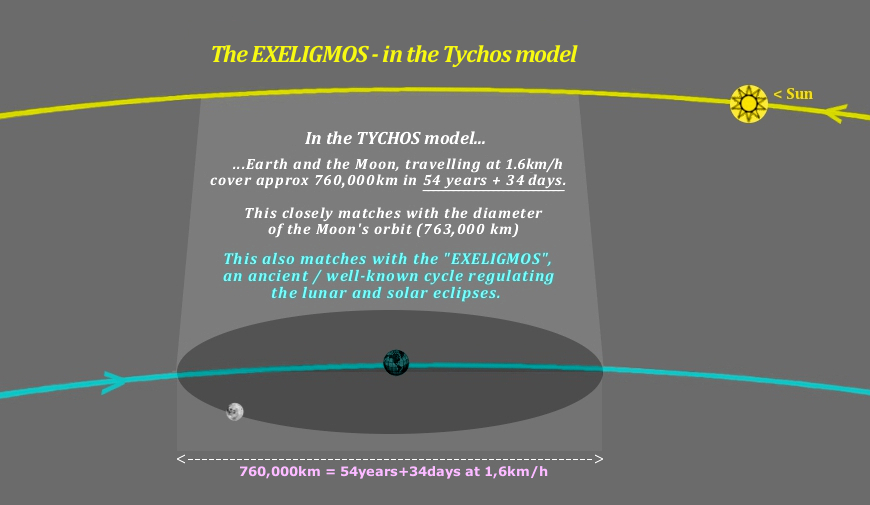 It would seem intuitively logical that an Exeligmos cycle will be completed when Earth and the Moon have together covered a distance almost equal to the Moon’s orbital diameter.

The Triple Saros cycle or “Exeligmos” comprises ca. 19,756 days, into which one can find nearly 48 Full Moon cycle lengths.

So 16 shows up again (3 X 16 = 48) telling us just how much the unsung “16 factor” pervades the arithmetic regulating our system’s celestial bodies. Add to this our realization that orbits share resonance at various multiples of the Moon’s TMSP period of 29.22 days. The Moon appears to be in every aspect a body of central importance to our binary solar system.

Let us briefly recap the ubiquitous appearances of the “16 factor”.

• Mars revolves around our system (from aphelion to perihelion) in about 16 years.

• Every 32 years (2 X 16), Mars very nearly conjuncts with all of our system’s celestial bodies.

• Mercury regularly retrogrades for an average period of 1/16th of a solar year (22.8 days).

• Our Moon’s Saros and Exegilmos cycles appear to be multiples of 16 Full Moon cycles.

The Moon’s Perigee Precession agrees with the TYCHOS Great Year 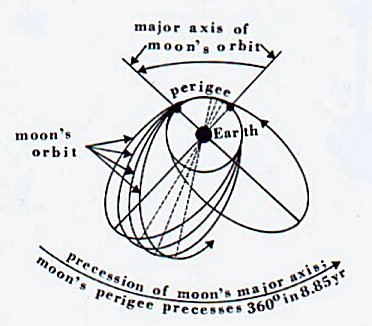 — A Modern Almagest: An Updated Version of Ptolemy’s Model of the Solar System by Richard Fitzpatrick (2010)

In total, the Moon’s perigee precesses annually by

As we compare this empirically-observed annual precession value of Moon’s perigee with our ACP of 51.1”, we see that the Moon’s perigee precesses 2864.495 X faster than the Sun.

Ergo the exact number of TMSPs completed in one Tychos Great Year of 25344 years and in perfect accord with my proposed Sun-Moon orbital resonance of 1 : 12.5.

In conclusion, the Moon’s empirically-observed apsidal precession is in full agreement with the TYCHOS model.