The relatively recent realization that our visible stars have a smaller (and oft invisible) companion is the single most significant, paradigm-changing astronomical epiphany of our modern age. Today, astronomers are incessantly discovering new binary systems at an ever-increasing rate. One can only wonder why such persistent findings haven’t yet sparked a major debate as to the validity of the Copernican model and its unique, “one-of-a-kind” configuration.

Below is one of my earliest TYCHOS graphics (2013) as I tried to wrap my head around the proposed geometry of Tycho Brahe’s so-called “geo-heliocentric” model. At the time, I wasn’t even aware that binary systems were by far the most common star formations in our skies. But then again – as already mentioned – neither were great astronomers like Tycho Brahe back in their day.

The intersecting orbits of Sun and Mars : a typical binary system 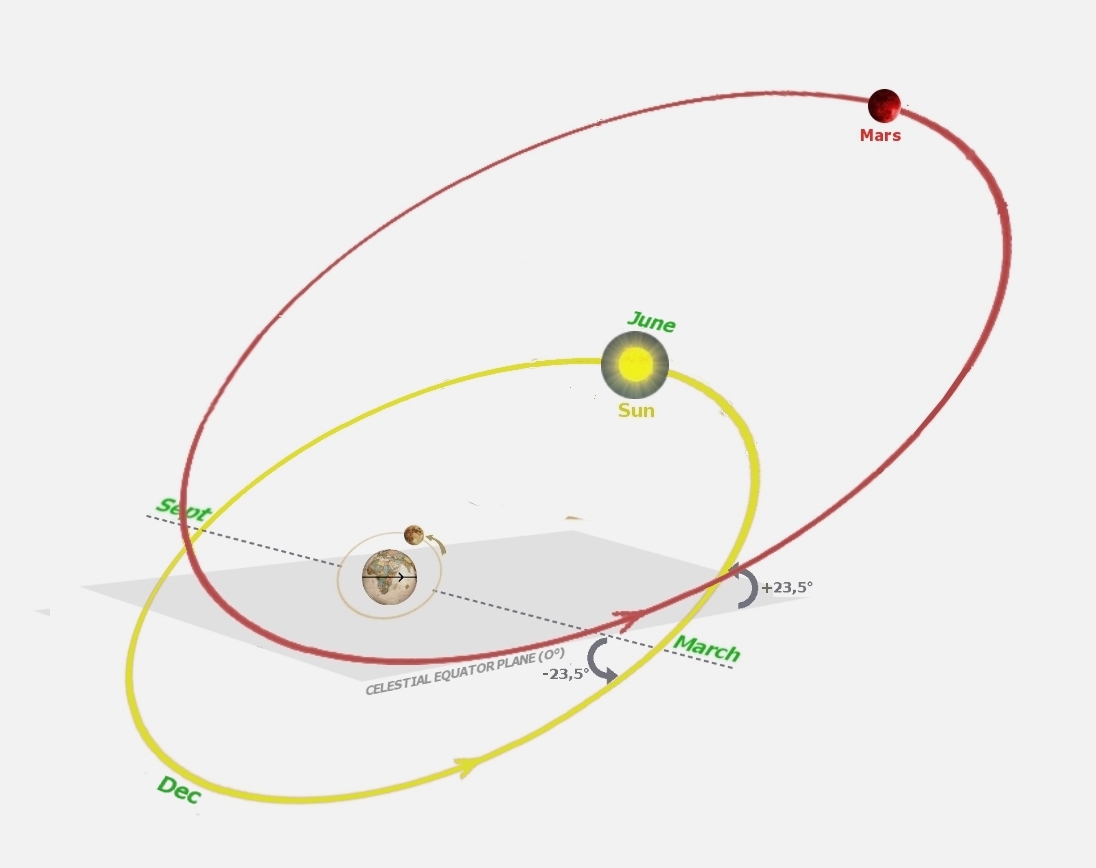 IMPORTANT NOTE: the above graphic is meant to be a “3/4 view” of our system – as if we were approaching our solar system in an imaginary spaceship at an angle, roughly at 45° above the “March / December” side. Thus, the apparent elliptical shapes of the Sun / Mars orbits are only a matter of perspective. In the TYCHOS model, ALL the orbits of our system’s bodies are uniformly circular.

Note that, in my above graphic, Earth is still lacking an orbit of its own. Yet, we shall see about how I overcame that age-old obstacle in due time. Please know that I have earnestly strived to do my best to document a progressive, step-by-step account of my thought processes, as the TYCHOS model gradually took shape in my mind. I fully realize the initial difficulty to take in and visualize this new configuration of our so-called Solar System – given, perhaps, the novelty of it all. However, I hope that by proceeding in short, descriptive sections it will be easier for everyone to follow the methodological path which led me to formulate the TYCHOS model and to arrive at its logical conclusions.

Let us begin with a classic binary star system, as illustrated on the website previously referenced in Chapter 1. 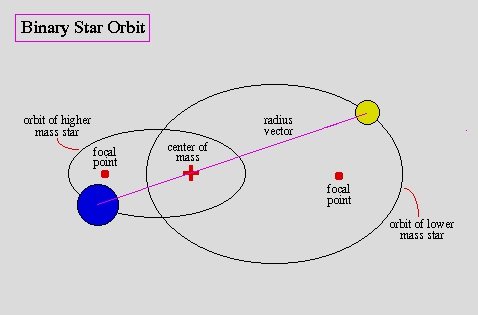 Notice that, if we substitute the above “high mass star” and “low mass star” with the SUN and MARS respectively (as I have done in the below adaptation) we obtain a neatly-balanced binary system that incorporates the two moons of the Sun (Mercury and Venus) and the two moons of Mars (Phobos and Deimos).

In addition, please separately observe the additional “plot twist” of paramount interest to us Earthlings:

In the TYCHOS, Earth is positioned near the center of mass (or barycenter) of the Sun-Mars binary system. 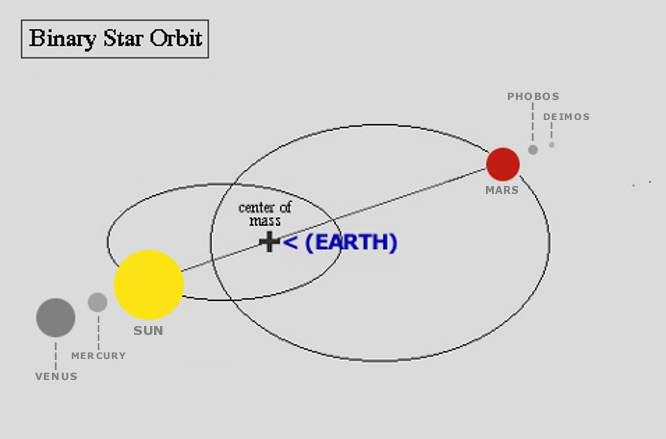 We can see just how harmonious such a binary system would be: Earth embraced by the Sun-Mars binary duo, each with their own two satellites. Now, if you are trained to think Relativistically, you might wonder: “But what about the highly unequal masses of the Sun and Mars?”

Note that binary star systems, as numerous as they are, pose a serious problem for Einstein’s theory of general relativity.

“If the general relativity method is correct, it ought to apply everywhere, not just in the solar system. But Van Flandern points to a conflict outside it: binary stars with highly unequal masses. Their orbits behave in ways that the Einstein formula did not predict. ‘Physicists know about it and shrug their shoulders,’ Van Flandern says. They say there must be ‘something peculiar about these stars, such as an oblateness, or tidal effects.’ Another possibility is that Einstein saw to it that he got the result needed to ‘explain’ Mercury’s orbit, but that it doesn’t apply elsewhere.”

We shall soon see that the highly unequal sizes of, for instance, Sirius A and Sirius B, are just as unequal as the Sun and Mars.

Comparing the moons of the Sun and Mars

In the TYCHOS model, Mercury and Venus are the Sun’s two tidally-locked moons, much as Mars also has two (lesser-known) tidally-locked moons: Phobos and Deimos, which were only discovered as recently as 1877 by Asaph Hall. (Tycho Brahe never observed them).

A closer look at the moons of Mars brings up some interesting interrelationships with their bigger sisters Mercury and Venus. Under the Copernican model, there would be no conceivable motive for these four celestial bodies to exhibit any sort of ‘”sympathy” with each other. Mars is supposed to be just another planet orbiting around the Sun. On the contrary, in the TYCHOS system, this is just the first of many incredible coincidences that suggests our entire system – each planetary body included – is locked in some form of magnetic harmony.

Consider these comparative facts about the moons of the Sun (Mercury and Venus) and the moons of Mars (Phobos and Deimos).

Things are beginning to look a little curious, aren’t they? Moreover …

Each year, Mercury revolves ca. 3.13 times around the Sun; whereas each day, Phobos revolves 3.13 times around Mars. As a way of comparison, think of the Sun that revolves once every year around Earth, whereas Earth rotates once every day around its axis. This may sound like a silly comparison (between a revolution period and a rotational period), unless you know that our Moon revolves around Earth in the same time as the Sun rotates around its axis (approx 27.3 days).

Mercury orbits the Sun near-precisely 5X faster than Venus, while Phobos orbits Mars near-precisely 4X faster than Deimos. The ratios are extremely close to whole numbers, and congruent with the concept of non-relativistic time. That is to say, assuming no Einsteinian “time warp”, these systems are directly interlocked with one another in real time.

Clearly, all this appears to indicate some sort of “kinship” between the two moons of Mars and the two moons of the Sun. Under the Copernican model’s configuration, these multiple resonances would be an utter mystery and would have to be classified as a string of “random coincidences”. Conversely, under the TYCHOS model, all of this can be envisioned much more logically. It is a natural consequence of Mercury and Venus & Phobos and Deimos being, respectively, the moons of the Sun and the moons of Mars.

You might now rightly ask yourself, “Why are Mercury and Venus the only ‘planets’ of our solar system with no moons of their own?”

As a matter of fact, this is one of astronomy’s longstanding (and still unsolved) mysteries. The truth of the matter is: no one actually knows why Venus and Mercury are “moonless”. To dismiss the absence by calling it happenstance doesn’t make the question go away. Meanwhile, no compelling theses on this spiny subject have been forthcoming to this day. Here are, for instance, NASA’s (tentative) explanations of this major cosmic enigma.

— Why don’t Mercury and Venus have moons? by NASA for Imager for Magnetopause-to-Aurora Global Exploration (IMAGE) Education Center

“Why Venus doesn’t have a moon is a mystery for scientists to solve.”

— How many moons? by Kristen Erickson (2017) for NASA Space Place

Now, the TYCHOS model has a short answer to this “mystery”’ : Venus and Mercury have no moons due to the simple fact that they are moons. Moreover, they are the two moons of the Sun just as Mars, its binary companion, has two moons. As it is, the notion that Venus and Mercury are moons (rather than planets) can be deduced in multiple ways. The first method has to do with their distinctively slow axial rotation speeds, which both appear to be ‘intimately related’ to the slowly-rotating Moon of Earth:

The rotational speed of Mercury (as of the TYCHOS*) is no more than 5.465km/h (almost exactly 3X slower than our Moon).

The rotational speed of Venus (as of the TYCHOS**) is no more than 2.711km/h (almost exactly 6X slower than our Moon).

The rotational speed of our Moon (as of official astronomical data) is no more than 16.7 km/h.

NOTE: In the TYCHOS model our Moon’s rotation is

Incidentally, if our three nearmost moons (our Moon, Mercury and Venus) are “locked” in a 1:3:6 rotational resonance, this is reminiscent of the well-known 1:2:4 orbital resonance of the three largest moons of Jupiter (Io, Europa and Ganymede).

Above — Source: Wikimedia commons via Wikipedia entry on “Io”
Here are my calculations for the rotational velocities of Mercury and Venus (as of the TYCHOS model paradigm). Please note that most (serious) astronomers will agree that both Mercury and Venus, as they return to perigee (i.e.; closest point to Earth), will always show the same face to us.

These are all, of course, exceptionally slow rotational speeds, especially when compared to the rest of our system’s celestial bodies. They are all in the rotational speed range of a children’s merry-go-round. We may therefore formulate refined definitions of a “moon” or “lunar body”, as opposed to a “planet”.

1. No moons have major satellites of their own, since they are moons themselves.

2. A moon’s rotation is always tidally locked to its host’s nucleus, and this remains independent of its host’s rate of axial rotation.

3. A moon rotates exceptionally slowly around its own axis – compared with all other known celestial bodies.

To verify the latter assertion, let us ask ourselves, “Do any other celestial bodies in our system have such extremely slow rotational speeds as our Moon, Mercury or Venus?” The answer is no. For instance, Jupiter rotates around its axis at a brisk 43,000 km/h and Saturn rotates around its axis at about 35,000 km/h. These are, of course, hypersonic speeds completely unlike lunar rotational speeds.

As for the question about Venus and Mercury being both tidally locked to the Sun (as posited by the TYCHOS model in contrast with previous theory), this will also be addressed later on, in the chapters dedicated to the Sun’s two lunar satellites.