To preface you may want to read some basic facts about the “Gregorian calendar” according to Wikipedia.

We shall now see how the Gregorian calendar and its current year-count (365.24219 days) will ultimately “flip our system upside-down” due to its vain attempt to keep the Sun-Stars axis aligned with our recurring traditional holidays.

— Wikia commons article on the “Year”

“The real motivation for the Gregorian reform was not primarily a matter of getting agricultural cycles back to where they had once been in the seasonal cycle; the primary concern of Christians was the correct observance of Easter. The rules used to compute the day of Easter used a conventional date for the vernal equinox (March 21), and it was considered important to keep March 21 close to the actual equinox.”

Over a “Great Year” this will cause the Sun-Earth axis to flip 180° in relation to the stars. In other words, the Summer and Winter solstices will become inverted, and so will (most probably) the tilt of the Sun’s orbit. As a result, the Sun will in time be lowest in our Northern Hemisphere skies around June 21. Surely, not an ideal way to keep a record of the seasons: although it will take 25344 years for this 180° inversion to occur, this will have significant implications for mankind (even in the short / medium term) for a number of imaginable reasons.

To illustrate what the Gregorian error entails, here are two screenshots from the TYCHOS Planetarium.

You may ask, “How did you arrive at the conclusion that the Sun will end upon the opposite side of Earth in 25344 Gregorian years?”

I perused the NEAVE Planetarium (a mostly accurate and trustworthy tool) in order to verify just how many minutes of RA the Sun is expected under the Gregorian calendar count to slip out of alignment with the background stars.

The two below screenshots from the NEAVE Planetarium show the astounding positions of the Sun on February 2, 2016 and (2112 years later) on February 2, 4128. We observe that the Sun is expected to slowly slip Eastwards (!) vis-à-vis the stars by exactly 15° or 60 minutes of RA. This is a direct contradiction of our current understanding of the precession of the equinoxes, which would have the Sun slowly drifting Westwards vis-à-vis the starry background. 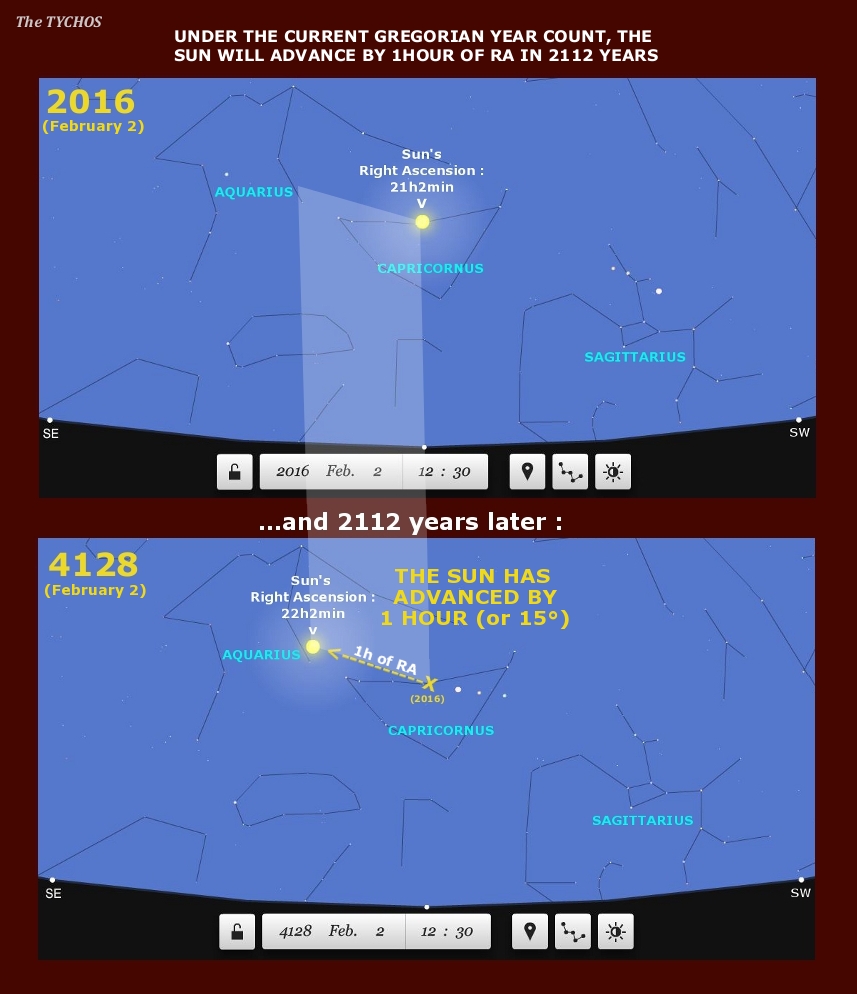 Note: the NEAVE Planetarium once allowed you to toggle the year count well beyond 4000 CE, as documented above. However, around mid-2016, I found that they had (quite inexplicably) restricted their viewing range to year 2500.

This means that, due to the slightly-too-long Gregorian year count of 365.24219 days, we are currently allowing the Sun to drift Eastwards at an annual rate of:

If we multiply this amount by the number of years in our TYCHOS Great Year we obtain:

Exactly one half of our celestial sphere!

So by the Gregorian calendar year’s accounting, the Sun is drifting in the opposite direction. What exactly is going on here?

Well, it would seem that, as the Gregorian calendar was promulgated back in 1582 (just as Tycho Brahe started questioning the Copernican theory) the prime concern for the Vatican and its clique of vetted astronomers was to “combat” Earth’s inexorable motion around its orbit. Over time, this offsets the Earth-Sun alignment vis-à-vis the stars. Thus, any calendar-based religious recurrences (such as Easter) cannot possibly keep recurring indefinitely under the same star alignments. The whole idea of the Gregorian year count was presumably to try and minimize this problem for, at least, the coming centuries.


1/2 of a year – or half of a solar revolution. In other words, if we keep counting one solar year as “365.24219 days” the Summer and Winter solstices will invert with respect to the stars.

However, there’s a relatively simple thing we can do to prevent this from happening. We should ideally recalibrate our reckoning of the duration of a solar year so as to make the Sun’s secular precession lock to Earth’s clockwise motion around its PVP orbit, which is the physical reality.

Looking at the above 2112-year example (from 2016 to 4128) we see that the Sun, which was in Capricorn in February 2016, is expected to be near Aquarius In February 4128. Ideally, the Sun should then be in Sagittarius. This is because empirical observations have long determined that our stars always move Eastwards in relation to Earth’s equinoctial axis.

Thus, we will want to shorten the current, Gregorian solar year count so that the Sun ends up in Sagittarius in February 4128. 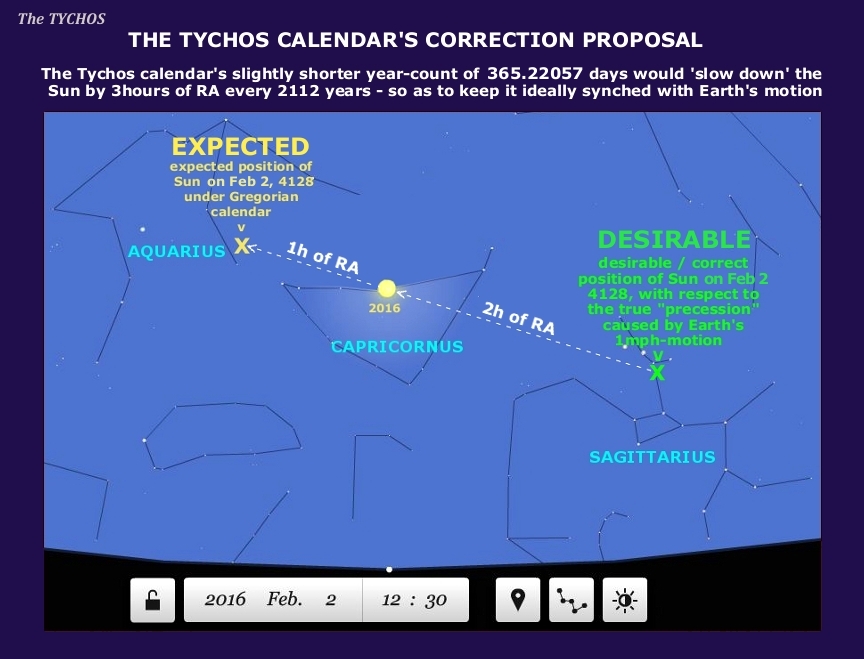 To achieve this we only need to shorten our current Gregorian measurement of 2112 years by:

“The computed path of a solar eclipse that occurred 2000 years ago would be in error by about 3 hours, or some 45 degrees in longitude to the west, on the assumption that the rate of rotation of the earth were uniform.”

This is currently interpreted as a supposed “deceleration of Earth’s rotation” (and/or an acceleration of our Moon’s orbital speed) which, in turn, would be the reason for our so-called atomic clocks — our “civil time” — needing to be continuously readjusted. Here’s the introduction to the above-referenced article:

“The aged Earth is slowing down in its daily rotation, at least in the current epoch. Civil time is occasionally adjusted by one second increments to ensure that the difference between a uniform time scale defined by atomic clocks does not differ from the Earth’s rotational time by more than 0.9 seconds. Coordinated Universal Time (UTC), an atomic time, is the basis for civil time.”

To find our ideal duration of a TYCHOS year, we will just have to divide that figure by 2112 equal slices:

We shall soon see that I am certainly not the first person on this planet to have arrived at the above ideal year count.

We should therefore have to recalibrate our clocks with respect to this desired, annual, slightly shorter angular rotation of Earth. Theoretically, all we could is shorten our clocks´measurement of Earth´s last rotation of the year (December 31) by 0.0059197%.

Earth rotates in the Gregorian scheme once every 86,400 seconds. We see that:

However, to advance our clocks every December 31 by 5.1146 seconds would, of course, be impractical. Instead, we should more logically distribute these 5.1146 seconds across the full 365.24219-day spectrum of our current Gregorian calendar’s year count:

We may thus obtain our desirable Sun-Earth synchrony with our calendar count by making our clocks count off 14 more milliseconds than we presently do each day. As a result, the Sun’s orbital precession rate would remain ideally “locked” with Earth’s clockwise motion around its PVP orbit — and our civil calendar´s year count. This should allow for unprecedented reliability of all astronomical and climatic predictions for future times.

A vivid international controversy has been raging for several decades regarding the periodic (yet arbitrary) insertion of leap seconds to the international coordinated timescale (UTC). This “system of correction” was implemented in 1972 because it is erroneously believed that Earth’s rotation is gradually slowing down, thus causing our atomic clocks to slip out of sync with true solar time. However, this erratic practice has caused serious problems and confusion over the years in various areas of human activity — so much so that many countries are now suggesting to abolish the leap second gimmick altogether. This short article sums up the problem succintly:

“The US has supported dropping the leap second for quite a while, and had the backing of countries including Japan, Italy, Mexico and France at an international meeting in 2012, according to a BBC report at the time. The UK, on the other hand (along with Canada and Germany if the last meeting is anything to go by), is pretty set against the change. Because while a second once or twice a year doesn’t sound like much, they’ll add up to throw our measured days out of sync with solar days—which we’ve been using long before fancy atomic clocks as an indicator of time. When opening up the public dialogue on the matter, Minister for Science David Willetts made his view pretty clear. ´My view is that without leap seconds we will eventually lose the link between time and people’s everyday experience of day and night,´ he said. The NPL (the UK’s National Physical Laboratory) does the math: In 800 years, the sun would be at the highest point at 1pm instead of noon.”

— The Plan to Lose Leap Seconds Would Throw Our Clocks Out of Sync With the Earth by Victoria Turk (June 6, 2016) for Motherboard

As of my above calculations, the Sun will in fact be at the highest point at 1pm instead of noon in circa 704 years*. That is, only if our time-regulating institutions should decide to drop the leap second insertions – and to ignore the optimal solution provided by the TYCHOS model with its proposed 5.1146-second adjustment of our clocks´ chronometric quantification of one solar year.

And yes, this means that in about 8448 years (704 X 12), the Sun will be at the highest point in a bright daylit sky when our clocks strike midnight !

Hence, we can see how the TYCHOS may, yet again, effectively resolve another longstanding scientific controversy. Undoubtedly, further study and refined computations are needed to determine how we may optimally synch our clocks with the TYCHOS year count. Yet, if the people currently in charge of our all-important time metrology were to have it their way(s), this may ultimately have catastrophic consequences. In a worst-case scenario, our clocks will drift dramatically out of phase with the true solar time – while “our days will become our nights” (and vice versa) long before the completion of a Great Year.