It appears that the Egyptian calendar preceded, and inspired, the Gregorian calendar’s practice of tweaking our “Passage of Time” since the Egyptians also tried to mould it to their own liking. So the Gregorian was tweaked to make Jesus Christ’s Easter resurrection coincide as closely as possible with the March equinox, the Egyptians also tweaked it to coincide with the heliacal rising of Sirius. The date has remained, for several centuries, quite remarkably stable.

“For it is remarkable that owing to the precession of the equinoxes, on the one hand, and the movement of Sirius on the other, the position of the sun with respect to Sirius is displaced in the same direction, almost exactly to the same extent.”

“The fact that Sirius seems to maintain its position relative to the position of the sun was a surprise to most scientists (aware of precession), when it was first noticed by the French scientific community following the Egyptian discoveries of Napoleon (and the Dendera Zodiac) in the early 1800’s.”

According to some authors it was none other than Tycho Brahe who first discovered this behavior of Sirius.

“ ‘Sirius remains about the same distance from the equinoxes — and so from the solstices — throughout these many centuries, despite precession’. In a personal correspondence with this author, Jed Buchwald also noted that ‘the effect was actually first discovered long ago by Tycho Brahe in fact, who informed the chronologer Scaliger about it.’ ” 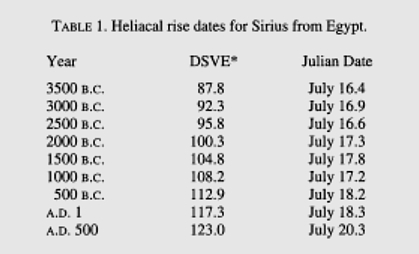 The above table is from:
p. 50, The heliacal rise of Sirius and ancient Egyptian chronology by Bradley E. Schaefer for Journal for the History of Astronomy, Vol. 31, Part 2, p. 149 – 155, Yale University

In the TYCHOS, the fact that Sirius has kept rising just before sunrise (for the last 2000 years or so) at almost the same time of year – and thus appears to precess less than other stars – can be explained as follows: Sirius is located in a position almost perpendicular to Earth’s direction of travel. As we just saw in Chapter 32, a 365.25-day year count will let the Sun drift “too much eastwards”, thus skewing Earth’s rotational position (with respect to the Sun’s zenith) by about 45° in roughly 2000 years. Consequently, the date of the heliacal rising of Sirius has remained fairly stable (in relation to our calendar count) for several centuries. 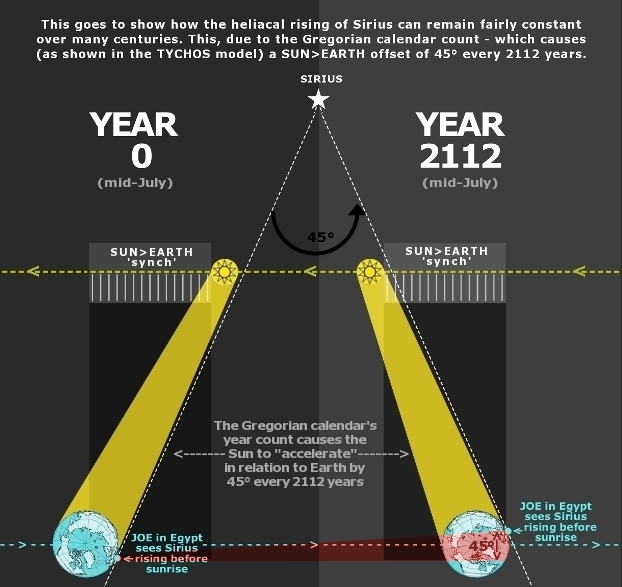 “The Sothic cycle is a period of 1,461 Egyptian civil years of 365 days each (or 1,460 Julian years averaging 365¼ days each). During a Sothic cycle, the 365-day year loses enough time that the start of its year once again coincides with the heliacal rising of the star Sirius.”

Earth’s 1-mph motion also resolves the “Sirius mystery” which, of course, is directly related to the fundamental (and even more controversial) question of the officially-defined durations of the tropical & sidereal year. Karl-Heinz Homann (who studied the Sirius question for decades) justly underlined the utmost importance of this matter in his brilliant paper:

“Experts at the International Astronomical Union (IAU) are in an uproar. Worldwide, thousands of students and teachers have been confronted with the most controversial astronomical problem in the history of science. In 1955 the IAU substituted the tropical year of 31,556,925.97474 seconds for the sidereal year as the fundamental unit of time. But in authoritative textbooks it is asserted that the time interval of the sidereal year or Earth’s complete period of revolution measured with respect to inertial space is about 31,558,149.5 seconds. The IAU refuses to confirm this assertion. Experts have recognized the fact that such a sidereal year does NOT exist in reality. The IAU is accused of willfully misleading the scientific community.”

— The Precession Paradigm by Uwe Homann (May 2000)

Fortunately, the TYCHOS model provides a definitive resolution to all of these astronomical controversies concerning Sirius.