“James Bradley, (born March 1693, Sherborne, Gloucestershire, Eng.—died July 13, 1762, Chalford, Gloucestershire), English astronomer who in 1728 announced his discovery of the aberration of starlight, an apparent slight change in the positions of stars caused by the yearly motion of the Earth. That finding provided the first direct evidence for the revolution of the Earth around the Sun.”

Astronomer Royal James Bradley’s Aberration of starlight is widely celebrated as the definitive proof of Earth’s motion around the Sun as it supposedly hurtles at supersonic speeds along a 300 Mkm-wide orbit. For those who might (understandably) never have heard of the formidably contrived “Aberration of light” theory, here follow some basic descriptions of this arcane astronomical concept.

“The aberration of starlight was discovered in 1727 by the astronomer James Bradley while he was searching for evidence of stellar parallax, which in principle ought to be observable if the Copernican theory of the solar system is correct. He succeeded in detecting an annual variation in the apparent positions of stars, but the variation was not consistent with parallax. The observed displacement was greatest for stars in the direction perpendicular to the orbital plane of the Earth, and most puzzling was the fact that the displacement was exactly three months (i.e., 90 degrees) out of phase with the effect that would result from parallax due to the annual change in the Earth’s position in orbit around the Sun.”

— Stellar Aberration from Reflections on Relativity by Kevin Brown (2017)

Here’s an extract from a fairly recent book titled The Sky at Einstein’s Feet. 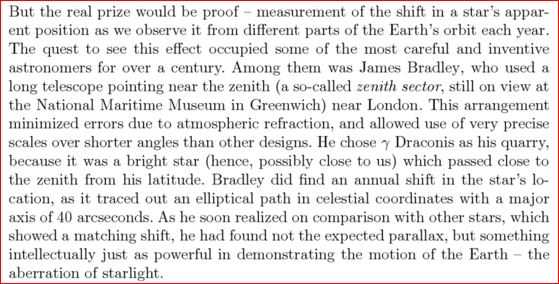 The below excerpt of another article neatly sums up Bradley’s puzzling observations, which had astronomers scratching their heads. Why does a star’s maximum elongation occurs in a nine month period, rather than (as Copernican astronomers would expect) a six month period? Furthermore, why would a circumpolar star such as Polaris be observed to travel around an ellipse of 40 seconds of arc, while stars level with Earth’s equatorial plane are all seen precessing annually by about 50.3 seconds of arc?

Quoting the above paper:

“For instance Polaris, the pole star, seemed to travel annually around an ellipse whose width was 40”, 40 seconds of arc. […] However, the shifts in position did not occur at the times they were expected. The greatest shift of Polaris in any given direction [occurred] not when the Earth’s was at the opposite end of its orbit, as it should have been, but 3 months later. For instance, in the drawing above, the apparent position of Polaris should have been shifted the furthest in the direction of ‘December’ when Earth was in its ‘June’ position, which is far as it can go in the opposite direction. Instead, it happened in September, when the Earth had moved 90° from its position in June.”

That’s right! Bradley and his peers found that, to their amazement, the maximum annual elongation of a circumpolar star from an earthly observer does not occur over the expected six-month time period but will, in fact, occur three months later. i.e.; nine months after the start of a year-long observation.

I will now illustrate exactly how — under the TYCHOS model — our North star Polaris will in fact reach its maximum elongation (from an earthly observer) over a 9-month (rather than a 6-month) period and why Polaris is observed to travel annually around a 40”-wide ellipse. 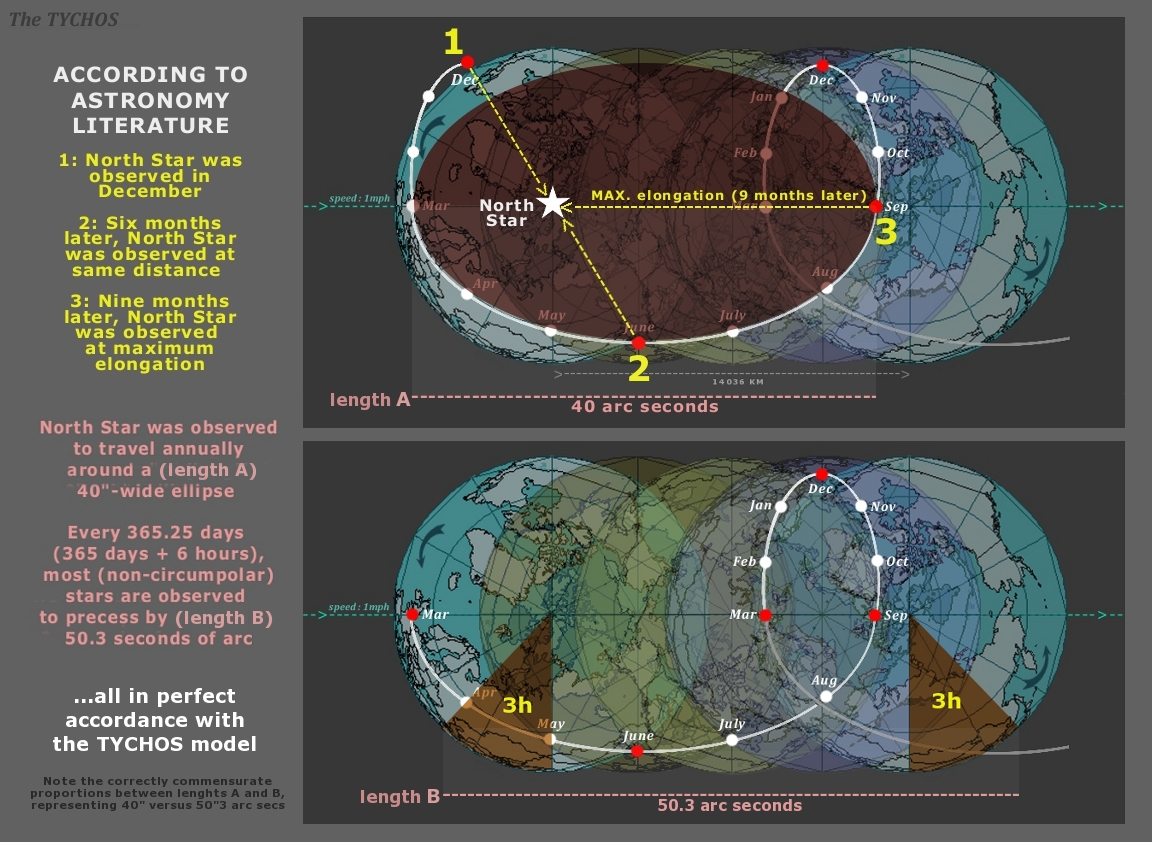 As mentioned in my above graphic, please note that the lengths A and B (representing two of the most well-known, empirically-verifiable measurements in astronomy) are perfectly consistent, proportionally speaking. I recommend you verify this for yourself with a simple ruler that length B is 1.25 X larger than length A (since 50.3” is 1.25 X larger than 40”).

Keeping in mind that these commensurate values rely on the core principles of the TYCHOS model (what with Earth’s annual 14,036-km-motion & the trochoidal path of earthly observers), the odds for all this to be entirely coincidental are, objectively speaking, beyond rational consideration.

The almost comical “stellar aberration” theory which Bradley concocted (in his urge to justify otherwise inexplicable observations) has to be among the most contorted attempts at rescuing the doomed Copernican model. In hindsight, it is quite ironic that Bradley’s painstaking efforts very nearly ended up imploding the Copernican theory from within, since his (otherwise quite valid & correct) observations were in stark contradiction with the Copernically expected stellar motions.

“It is important to notice that the early attempts were at measuring what today would be called absolute parallax, rather than relative parallax, which is the parallax of a nearer star with respect to that of a distant star”.

Keep in mind the above quote by J.D Fernie, as we shall soon get to the question of relative stellar parallax and its geoptical implications, which, as I shall thoroughly demonstrate, can only find a rational explanation within the TYCHOS model.