How can we see so many stars with our naked eyes?

It is a matter of historical record that Tycho Brahe rejected the idea of the implied, Copernican star sizes and distances. This conviction may be phrased in a question such as, “Why would Alpha Centauri (believed to be our nearmost star) be so enormously more distant than, say, Saturn?” To be sure, this still-unanswered question was precisely what most bothered Tycho Brahe about the heliocentric Copernican theory.

“In the absence of any observed stellar parallax, Tycho scoffed for example at the absurdity of the distance and the sizes of the fixed stars that the Copernican system required: Then the stars of the third magnitude which are one minute in diameter will necessarily be equal to the entire annual orb [of the earth], that is, they would comprise in their diameter 2284 semidiameters of the earth. They will be distant by about 7850000 of the same semidiameters. What will we say of the stars of first magnitude, of which some reach two, some almost three minutes of visible diameter? And what if, in addition, the eighth sphere were removed higher, so that the annual motion of the earth vanished entirely [and was no longer perceptible] from there? Deduce these things geometrically if you like, and you will see how many absurdities (not to mention others) accompany this assumption [of the motion of the earth] by inference.”

Another fundamental optical issue hardly ever questioned: How can so many stars possibly be visible to our unaided eyes if our nearmost star is 4.37 light years away? And how is this possible if countless others are visible without the aid of a telescope, if they are supposedly located dozens, hundreds or even several thousands of light years away?
Now, if you wonder how distant the farthest star visible to our naked eyes is currently reputed to be, here’s what we are told.

“The farthest star we can see with our naked eye is V762 Cas in the constellation of Cassiopeia at 16,308 light years.”

— What is the distance to the farthest star we can see with our naked eye? by Sudeep Dutt (2016) for Socratic.org

So the farthest star is supposedly 3732 X farther away than our nearmost star, or 1,031,335,858 X further away than our Sun! Before you try to conceptualize just how big this star would have to be in order to be visible to our unaided eyes, I would advise you to lie down and take an aspirin.

“Most stars are very much larger than our Sun — and some are far more luminous than our Sun.”

You may find the Wikipedia page on “Luminosity” to be an enlightening read.

Well, here’s the implicit aberration flying in the face of the claim. Alpha Centauri A (the fourth-brightest star seen from Earth) is, according to modern astronomy data, no more than 22% larger than our Sun, and its luminosity is said to be no more than 1.5X that of our Sun.

Let me now give you a rough idea of what Alpha Centauri A would look like if we make it only 100 times smaller than shown above.

All I have done in the below graphic is reduce the disc representing Alpha Centauri A to 1% of its size: 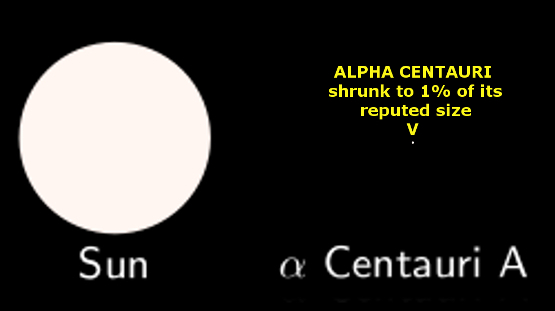 Now, Alpha Centauri A is not meant to be only 100 X times further away than our Sun (as visualized above). No, we are told that it is 276,360 X further away — while being only 22% larger and 1.5X brighter than our Sun! If true, how could it conceivably remain visible to the naked, unaided human eye?

Keep in mind that Alpha Centauri is considered to be our nearmost star. If we consider the distances currently claimed for one of our brighter stars Deneb (a.k.a. Alpha Cygni) the whole affair becomes well and truly outlandish. Deneb is said to be a good 200 X times larger than our Sun but we are also told that it is a whopping 2600 LY away from our eyes. That’s about 164,426,800 AU!

Yet, Deneb is one of the brightest “naked-eye stars” in our skies!

“A blue-white supergiant, Deneb is also one of the most luminous stars. However, its exact distance (and hence luminosity) has been difficult to calculate; it is estimated to be somewhere between 55,000 and 196,000 times as luminous as the Sun.”

— from Wikipedia entry on “Deneb”

With such a vast range of brightness estimates, one may suspect that they are little more than wild guesses.

The above Wikipedia page for star Deneb goes on to say that,

“one 2008 calculation using the Hipparcos data [gathered by ESA’s Hipparcos satellite] puts the most likely distance at 1,550 light-years, with an uncertainty of only around 10%.”

Yet, some modern planetariums have Deneb at a distance of 3227 light years, i.e.; over twice as distant! Do the stellar estimations of our world’s astronomers ever agree with each other? Is star Deneb 1550, or 2600 — or 3227 light years away? Evidently, no one seems to know with any degree of precision. I, for one, grew up with the notion that astronomy was more exacting than this.

Virtually nothing adds up with these claimed, formidable star distances and the wildly conflicting estimates of the same. They are all, as TV-celebrity Carl Sagan loved to say, “extraordinary claims” that “require extraordinary evidence”. It should thus come as no surprise that (as we shall see further on) many respected independent astronomers have, in later years, vigorously questioned the star catalogues published by NASA and ESA (the European Space Agency) over their claimed star distances.

Moreover, the question has extended to ESA’s official catalogues of stellar parallaxes.

What follows about that subject should, I dare say, put the last nail in the coffin of the long-doomed Copernican heliocentric theory. I will now submit indisputable evidence that the geometry of the TYCHOS model provides the only possible explanation for the observed stellar parallaxes.