Below is a basic configuration of the TYCHOS or what we may call our “geoaxial binary system”. In the TYCHOS, the Sun and Mars are the main players of a typical binary system. At or near its barycenter, we find Earth and our Moon, while the Sun (escorted by its two moons, Mercury and Venus) and Mars (escorted by its two moons, Phobos and Deimos) perform their binary dance around our planet. It is Earth’s physical motion around its “PVP” orbit (see blue circle) that causes our North stars to change over time – a very slow process commonly-known as the “precession of the equinoxes”. 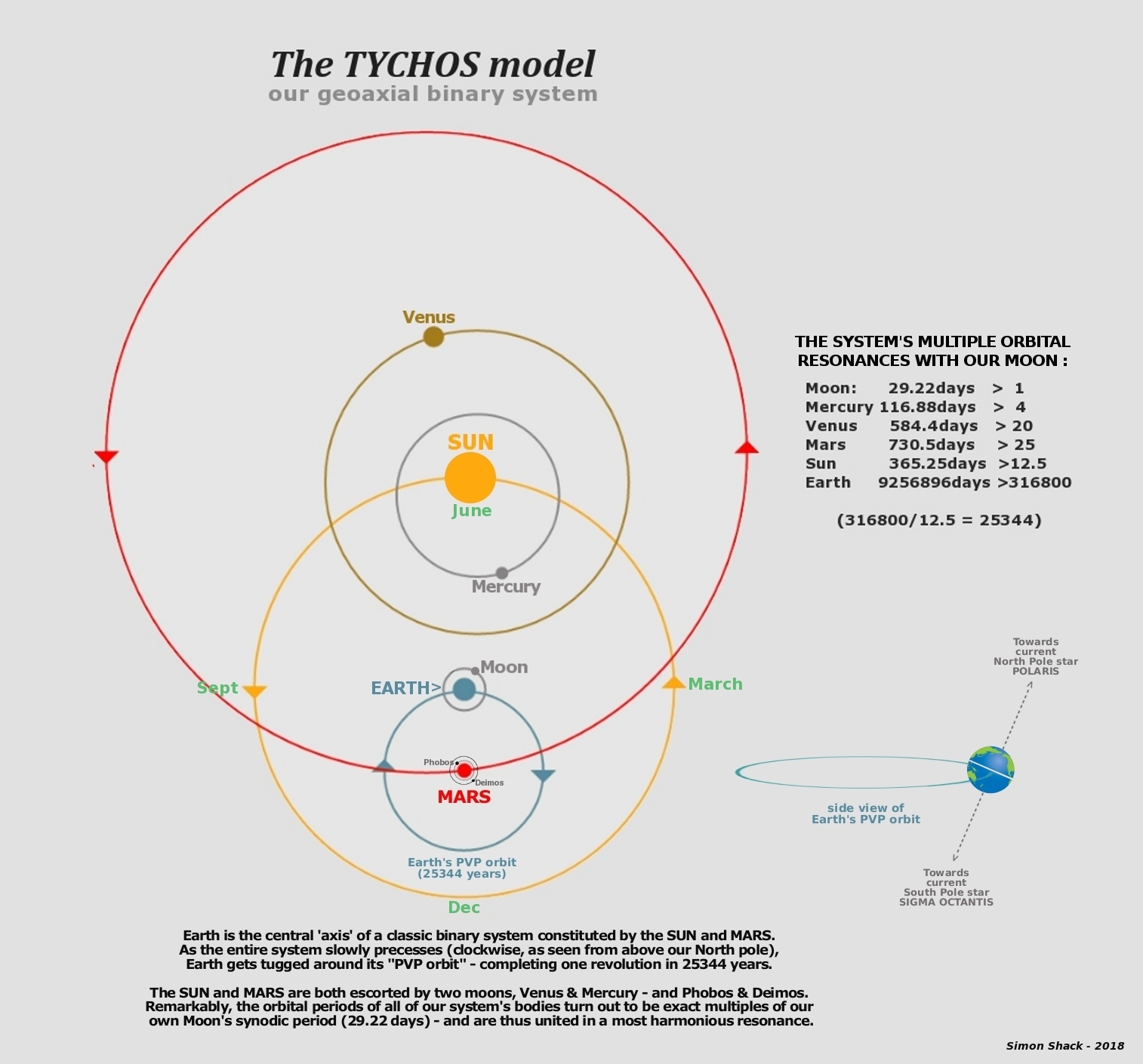 The Sun revolves once a year around Earth, traveling at 107,226 km/h (the orbital speed attributed to Earth in the Copernican model) while Mars, its binary companion, revolves once every two solar years around the Sun and Earth both. In the TYCHOS, Earth is inclined at about 23° in relation to its orbital plane – yet (unlike current theory) its Northern hemisphere remains tilted at all times ‘outwards’, i.e. towards the external circuit of the Sun.

There is no need for Earth’s “wobble around its polar axis” (as of Copernican theory). Nor do we hurtle around space at hypersonic speeds. Earth only rotates once every 24 hours while it slowly gets tugged around at 1.6 km/h (about 1 mph) along its own clockwise path. It completes one revolution around its “PVP orbit” every 25344 years (a period also known as “The Great Year”). The “PVP” orbit (“Polaris-Vega-Polaris”) and Earth’s snail-paced orbital motion will of course be thoroughly illustrated further on, as they constitute the core postulations upon which the TYCHOS model is founded.

Oddly enough, Tycho Brahe apparently believed to his last day that Earth was totally stationary, did not rotate around its axis and that the stars all revolved around it in unison. One can only wonder how Tycho reconciled this belief with, for instance, the slow alternation of our polar stars through the ages. Eventually however (in 1622), Tycho’s trusty assistant Longomontanus (in his Astronomia Danica, regarded as “Tycho’s testament”) allowed for Earth’s daily rotation around its axis in what became known as the “semi-Tychonic” system. The observational accuracy of Longomontanus’ refined system has, to this day, never been surpassed:

Longomontanus, Tycho’s sole disciple, assumed the responsibility and fulfilled both tasks in his voluminous ‘Astronomia Danica’ (1622). Regarded as the testament of Tycho, the work was eagerly received in seventeenth-century astronomical literature. But unlike Tycho’s, his geoheliocentric model gave the Earth a daily rotation as in the models of Ursus and Roslin, and which is sometimes called the ‘semi-Tychonic’ system. […] Some historians of science claim Kepler’s 1627 ‘Rudolphine Tables’ based on Tycho Brahe’s observations were more accurate than any previous tables. But nobody has ever demonstrated they were more accurate than Longomontanus’s 1622 ‘Danish Astronomy’ tables, also based upon Tycho’s observations.

The TYCHOS system, it should be noted, is nothing but a natural evolution of the semi-Tychonic system, and is fully consistent with the unequaled observational accuracy of the same. However, the TYCHOS provides what one may call the “missing pieces of the puzzle” to the extraordinary work of Tycho Brahe and Longomontanus. Alas, their work was annihilated by the emergence of the Copernican heliocentric theory, which for unfathomable reasons prevailed – in spite of its numerous problems and aberrations. As we shall see, these problems stem from a distinctly unphysical nature. It is a poorly-known fact that the Copernican theory was by no means immediately embraced as a self-evident truth. It was strongly (and justly) rejected for several decades by the wider scientific community due the many leaps of logic that its core premises demanded. One of the most formidable mental leaps required in order to accept the Copernican theory was, of course, the unthinkable dimensions and distances that the stars would have in relation to our system.

Most scientists refused to accept [Copernicus’s] theory for many decades — even after Galileo made his epochal observations with his telescope. Their objections were not only theological. Observational evidence supported a competing cosmology,the “geo-heliocentrism” of Tycho Brahe. The most devastating argument against the Copernican universe was the star size problem. Rather than give up their theory in the face of seemingly incontrovertible physical evidence, Copernicans were forced to appeal to divine omnipotence.

— The Case Against Copernicus by Dennis Danielson and Christopher M. Graney