It is a widely-held misconception that heliocentric and geocentric models are equally valid and viable. However, there can only be one correct interpretation of our celestial mechanics and geometry that unfailingly predicts for all the interactions between our Solar System’s companions vis-à-vis the more distant stars. Through sound logic, induction and deductive reasoning (“à-la-Sherlock Holmes”) we should be able to discard the impossible hypotheses and retain the sole configuration which makes physical, geometrical, mechanical and optical sense, and is consistent at all times with empirical observation when tested.

And here is where the Copernican theory miserably falls apart. As you will see, what follows categorically disqualifies the Copernican model as a viable proposition, since its proposed geometry isn’t only problematic or questionable. It is outright impossible, unless you rewrite fantastic physical laws to excuse it. I shall demonstrate this fact with the following, exemplary case.

There are two types of planetariums we may take astronomical data from. One attempts to place every cosmic body in our system in its place within the Copernican system, such as SCOPE (which features an attempt at an “overhead” view of our system, as if we were looking at it from above our North Pole). The other type of planetariums (such as NEAVE and STELLARIUM) is considerably more realistic and verifiable, as it simulates our stars’ and planets’ positions just as we can observe them from Earth. Bear this in mind in the following comparison.

The two below pairs of screenshots (from the SCOPE and NEAVE planetariums) compare the positions of Earth and Mars on two given dates separated by 546 days (ca. 1½ years). In this time interval, both Earth and Mars would have (according to the Copernican model) moved laterally by about 300 Mkm. Yet, on both of these dates, an earthly observer will see Mars perfectly aligned in conjunction with star Delta Capricorni. How can this possibly occur in reality (as it does) if the Copernican model were true?

In order to put this problem in due perspective, let us look at a classic explanation for the observed retrograde motion of Mars:

Note that this particular parallax issue (Mars-Earth alignment with a given star) should not be confused with the historical and ongoing controversy regarding stellar parallax (that is, the nigh-undetectable parallax between nearby and more distant stars, which we will explore later). In the present case, we are dealing with the immensely more problematic total absence of parallax between a given, distant star and the two far closer objects, Earth and Mars. The two of them should, according to the Copernican model, somehow be able to remain aligned with that same star after having displaced themselves laterally by about 300 Million kilometers!

On the other hand, the TYCHOS model provides a plain and reliable geometry that explains why Mars will, at times, only need 546 days to return to a given star (even though Mars’s habitual sidereal period, the “Long ESI”, lasts for ca. 707 days). Here is how:

How the TYCHOS accounts for Mars aligning with the same star twice within 1.5 years 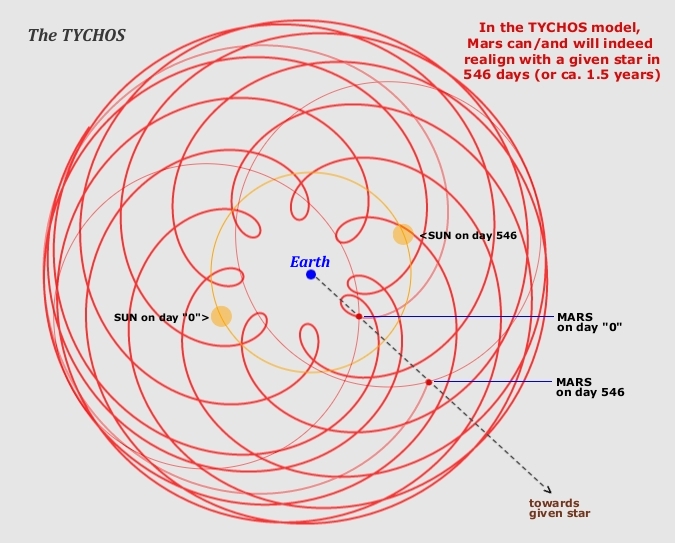 The TYCHOS model needs no magical & otherworldly laws of optics and perspective to account for our observed cosmic motions. Mars will simply be actually located in line with the same star, in a very real physical sense, at both ends of a 546-day (or 1 ½ year) period. This, due to its peculiar epitrochoidal path around the Earth-orbiting Sun, which causes Mars to pass through the same “line of sight” from an Earthly perspective (although at different Earth-Mars distances).

Later on, you may wish to verify this for yourself (Mars’s Short ESI) by perusing the TYCHOS Planetarium (Chapter 21). Today, the TYCHOS is the only existing model which can explain why Mars can possibly conjunct twice with a given star within a 1.5-year period.

Next, we will compare two other screenshots from the SCOPE planetarium. They depict two conjunctions of Earth and Venus with star Regulus (in the Leo constellation) occurring within an interval of 816 days (or 2.234 years). In that time period, according to the Copernican model, Earth and Venus would both move laterally (vis-à-vis the Sun) by about 200 Mkm. Yet, an earthly observer will see Venus conjunct with star Regulus on both of these dates! How can the Copernican model possibly describe this real event? 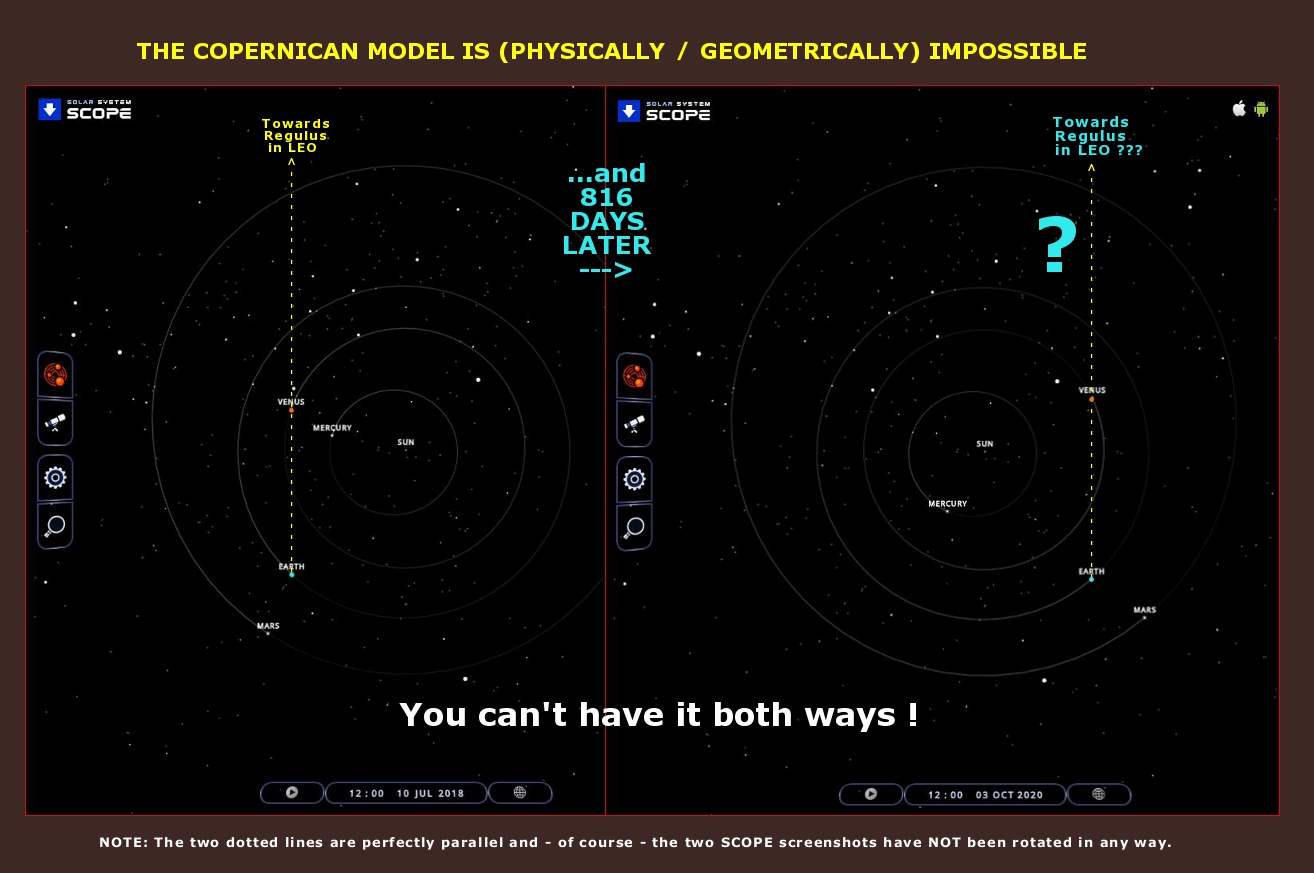 The NEAVE planetarium which simulates (far more realistically) our cosmic motions, just as we observe them from Earth, confirms that we can – in reality – observe Venus and Regulus conjuncting at both ends of our chosen 816-day period: 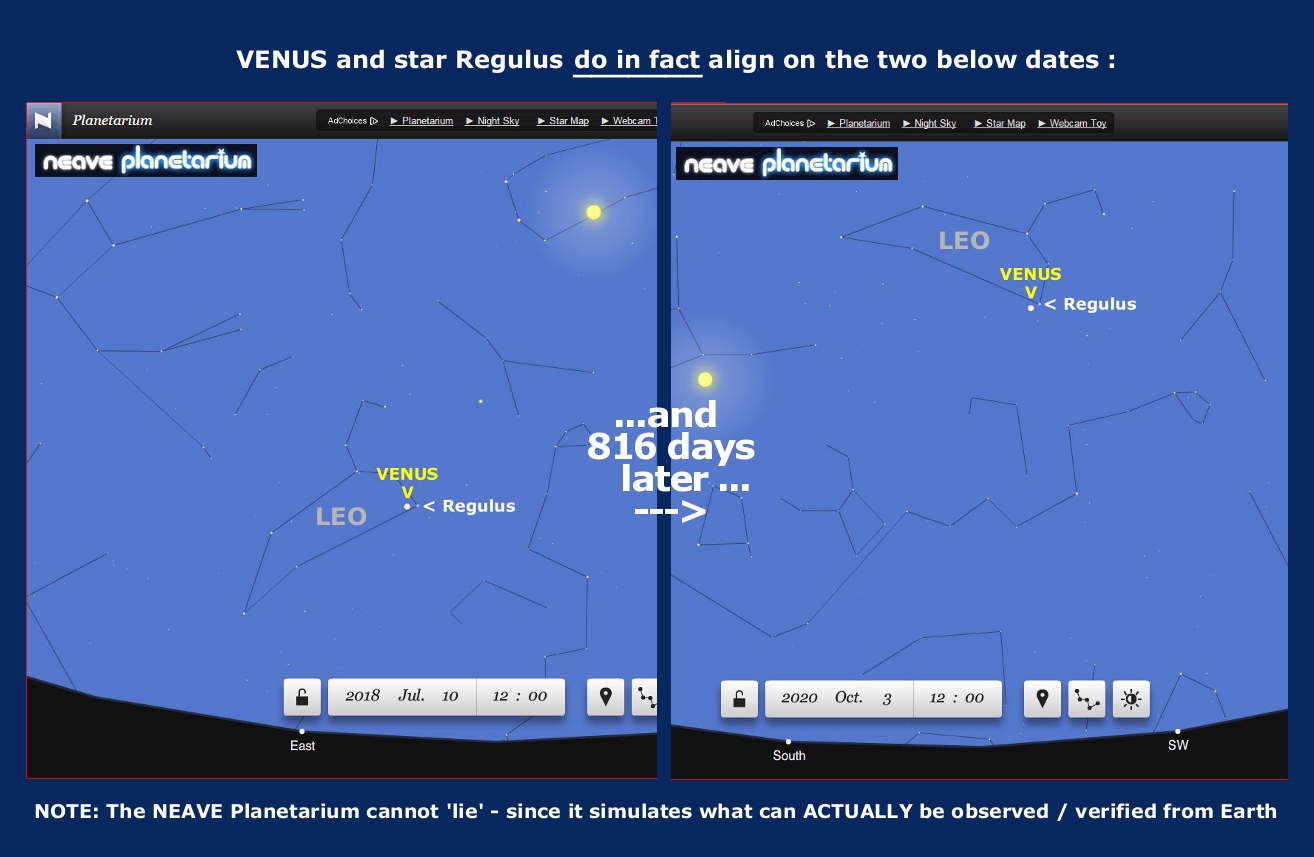 Once again, the TYCHOS model can geometrically demonstrate how and why Venus will indeed return facing a given star in 816 days: 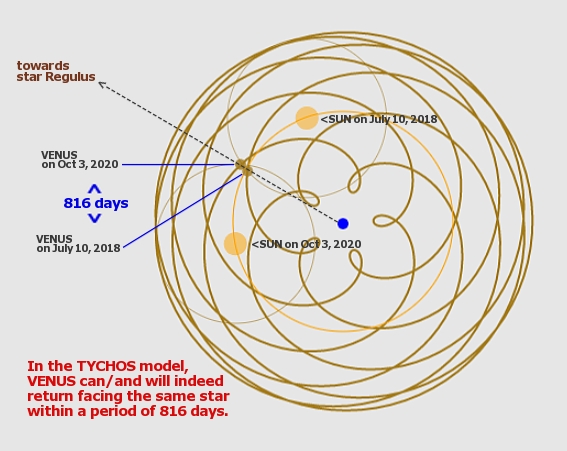 Just as in the Martian example, Venus orbits the Sun, which orbits the Earth. As such, Venus will physically return in alignment with a given star, as it follows the Sun’s path through the constellations. Venus’ distance from Earth may change, but its heavenly position as seen from Earth will appear to be replicated.

Later on, you may wish to verify Venus’s 816-day period for yourself by perusing the TYCHOS Planetarium. Today, the TYCHOS is the only existing model which can explain why Venus can possibly conjunct twice with a given star at both ends of an 816-day period.

The Copernican model’s dubious duration of the retrograde periods

Another problem afflicting the Copernican model is its apparent, irreconcilable geometry with regards to the observed retrograde periods of Venus and Mercury (circa 45 and 23 days respectively). Let us first see how the NEAVE Planetarium depicts a typical retrograde period of Venus just as is observed from Earth.

It is an observed and indisputable fact that Venus never retrogrades for more than 50 consecutive days.

Now, according to Copernican theory, the reason why we see Venus and Mercury retrograding is because they periodically “overtake us” as their orbital motion around the Sun brings them towards Earth (that is, towards “our orbital side of the Sun”). The two of them are, of course, considered to travel a good deal faster than Earth.

If this were true, however, Venus and Mercury would be seen retrograding for much longer than 45 and 23 days. This can be demonstrated with my following illustrations. My 90° angles indicate the moments in time when Venus and Mercury should, theoretically, gradually start reversing their perceived orbital directions in relation to the Sun (which, under the Copernican model, would of course constitute our central point of directional/angular reference). 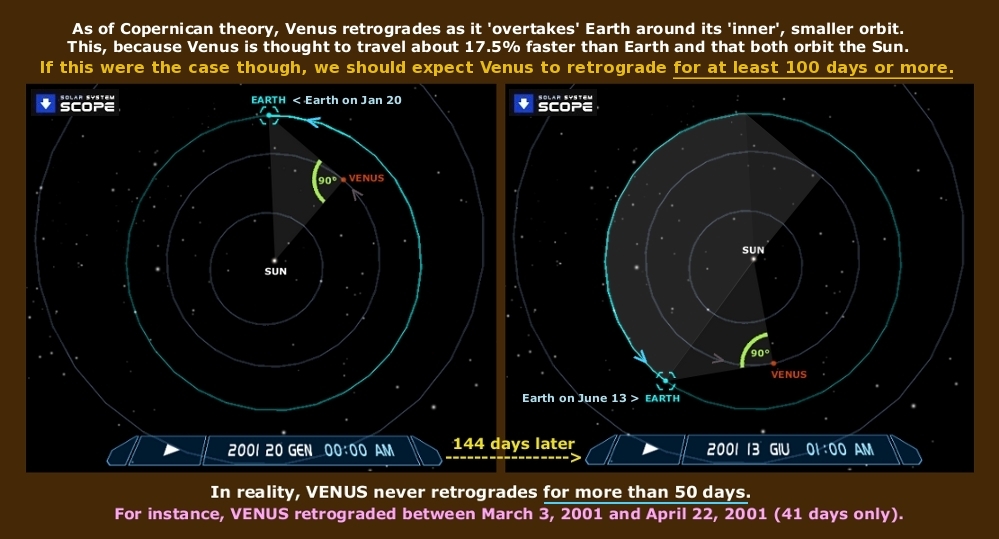 One may argue that my stated “at least 100 days or more” estimate is vague. In that case, I challenge any Copernican advocate to provide a cogent, illustrated explanation as to why Venus is always observed to retrograde for fewer than 50 consecutive days. Indeed, the very same problem afflicts the retrograde period of Mercury, which never retrogrades for more than 25 days. 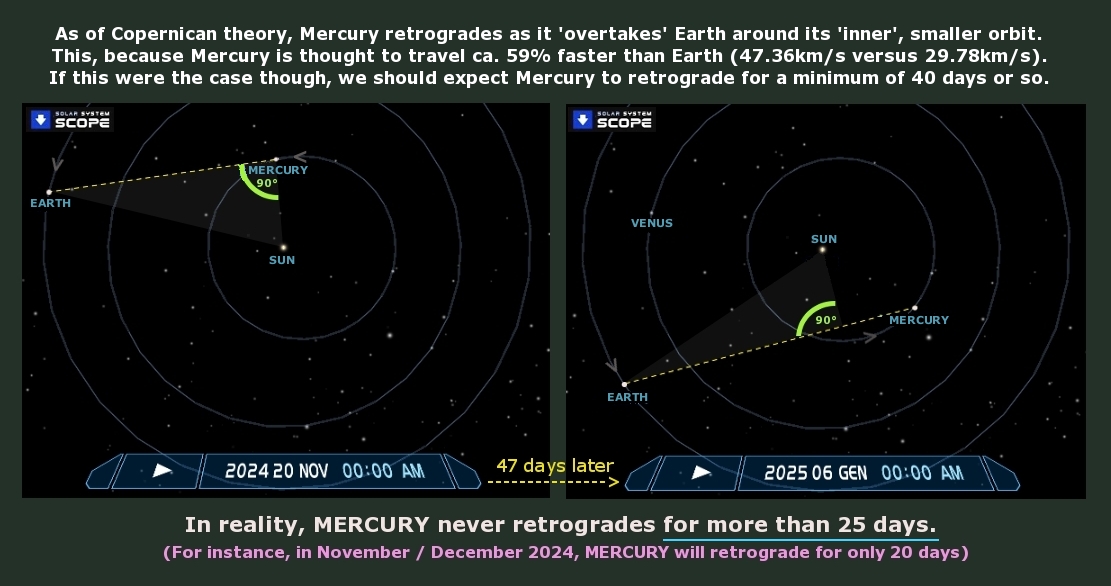 Under the Copernican model, the duration of Venus’ and Mercury’s retrograde periods make very little “geoptical” sense (my neologism inferring “what should be logically observed under given geometric & optical constraints”). Venus and Mercury do retrograde, as they are observed to do, for as little as 45.6 days and 22.8 days on average.

Yet in a Copernican perspective, we should certainly expect them to retrograde for longer. The observed duration of the retrograde motions of both Venus and Mercury appear to be outright irreconcilable with the currently-accepted geometry of our system.

Before proceeding to expound the more technical aspects of the TYCHOS model (as well as the methods and logical processes behind its formulation) I have highlighted in the following chapters a number of intrinsically problematic aspects of the Copernican model that the TYCHOS does away with, corrects or effectively resolves.