The retrograde periods of Venus and Mercury (the Sun’s two moons) occur in a similar mode as those of Mars: they both produce teardrop-shaped loops as they transit in inferior conjunction with the Sun. It is a perfectly natural, dynamic geometric pattern (known in geometry as an epitrochoid) yet one that the human mind has, understandably, some difficulty to conceptualize. My below graphic, however, should make it easy to visualize how and why these “teardrop loops” occur. 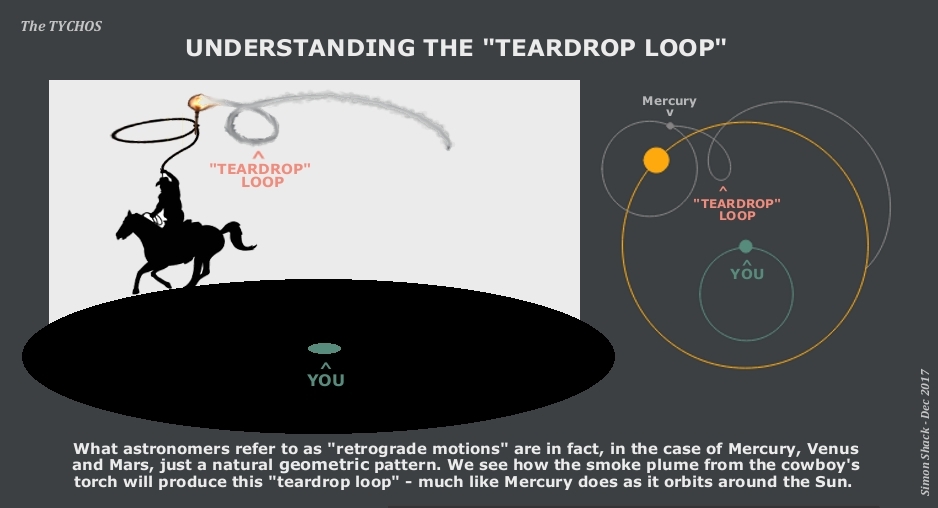 As you can see, this type of retrograde motion is not merely an illusion of perspective, like the so-called “retrograde” motion that affects our P-Type planets as they appear to move backwards against the background stars. In this case, the backward motion is part of the actual physical path traced by the observed object. In the above fanciful picture, our cowboy’s torch will leave a teardrop-shaped smoke plume because the torch actually swirled around that patch of sky. The “teardrop loop” is simply a consequence of the horse’s forward motion coupled with the gyrating lasso’s circular motion.

Watch animation of Mercury’s path around the Sun

Watch animation of Venus’s path around the Sun

If you are ready to introduce yourself to a simulation of the full TYCHOS system, please read Chapter 21 on the Tychosium 2-D program. The below screenshot from the Tychosium highlights a retrograde period of each of the Sun’s two moons. 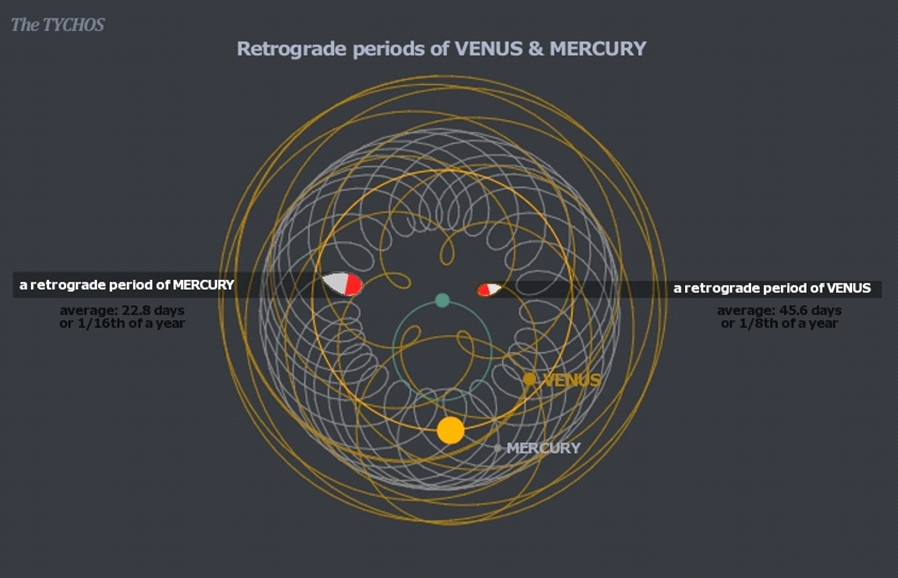 RETROGRADE PERIODS OF MERCURY & VENUS
The retrograde period of Mercury lasts for ca. 22.828 days on average — or 1/16th of a solar year.

During these briefer periods, we see Mercury and Venus moving in the opposite direction of the Sun. Thereafter, they resume so-called “prograde” motion, moving West-to-East in our skies, along with the Sun.

PROGRADE PERIODS OF MERCURY & VENUS
The prograde period of Mercury lasts for ca. 94 days on average.

The prograde period of Venus lasts for ca. 538.7 days on average.

During these much longer prograde periods, we see Mercury and Venus moving as we expect, in the same direction as the Sun.

Note that there is nothing elliptical at all about the lunar motions of Venus and Mercury. They both perform uniformly circular orbits around their orbiting host, the Sun, maintaining their consistent and steady distances relative to her.

As can be readily visualized in the two above-linked animations, what needs to be understood about these odd, “teardrop-shaped” retrograde loops (performed by Venus, Mercury and Mars) is that they are entirely dependent on the orbital speed of these bodies as they revolve around the Sun. For instance, let us imagine for a moment that Mercury’s orbital speed were 8X slower than it is in reality. Well, here is a simulation of how Mercury would behave in relation to the moving Sun.

As you can see, if only Mercury were moving 8X slower, then it would have no retrograde period. From Earth, we would just see Mercury as a moon revolving around the Sun – at times in front of it and at other times behind it – yet always moving in the same direction as its host. The retrograde motions of Mercury, Venus and Mars are a consequence of their relatively high orbital speeds while all of them simply revolve in uniform circular motion around the Sun, along its annual path round the Earth.

Let’s now take a closer look at some other aspects of our Sun’s two moons, Mercury and Venus.