We shall now proceed to see how the TYCHOS model can account for the “precession of the equinoxes”.

Here is a classic illustration (well-known to astronomers) plotting the circular motion responsible for our “North Stars” to change over time, thought by some to be caused by that “Lunisolar wobble”. Note that, if viewed from above our North Pole, this circular motion proceeds in a clockwise direction. 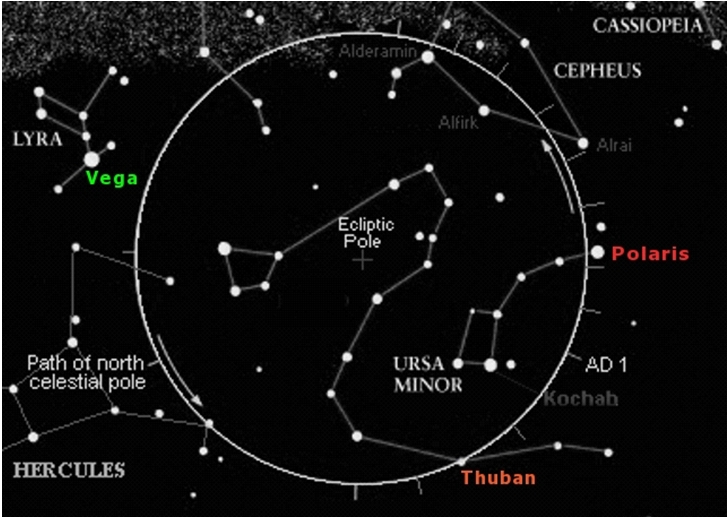 Above — from Professor Mahoney’s Astronomy Website by Robert Mahoney (2016)

Now, if Earth doesn’t wobble, could it instead be physically moving clockwise (as seen from our North stars) below the circular path which extends from Polaris to Vega, and back again to Polaris? Surely, this wouldn’t be too much of a fanciful proposition; after all, everything else moves in a circular orbit.

Let us put this proposition to the test and see if we can find out at what speed the Earth would travel (as it completes this 360° journey) around a circle which I have called the PVP orbit (Polaris-Vega-Polaris). To do so, we will first need to estimate the diameter of our orbit. My next graphic illustrates the methodology behind my determination of this diameter.

The PVP orbit — Earth’s path below our North Stars 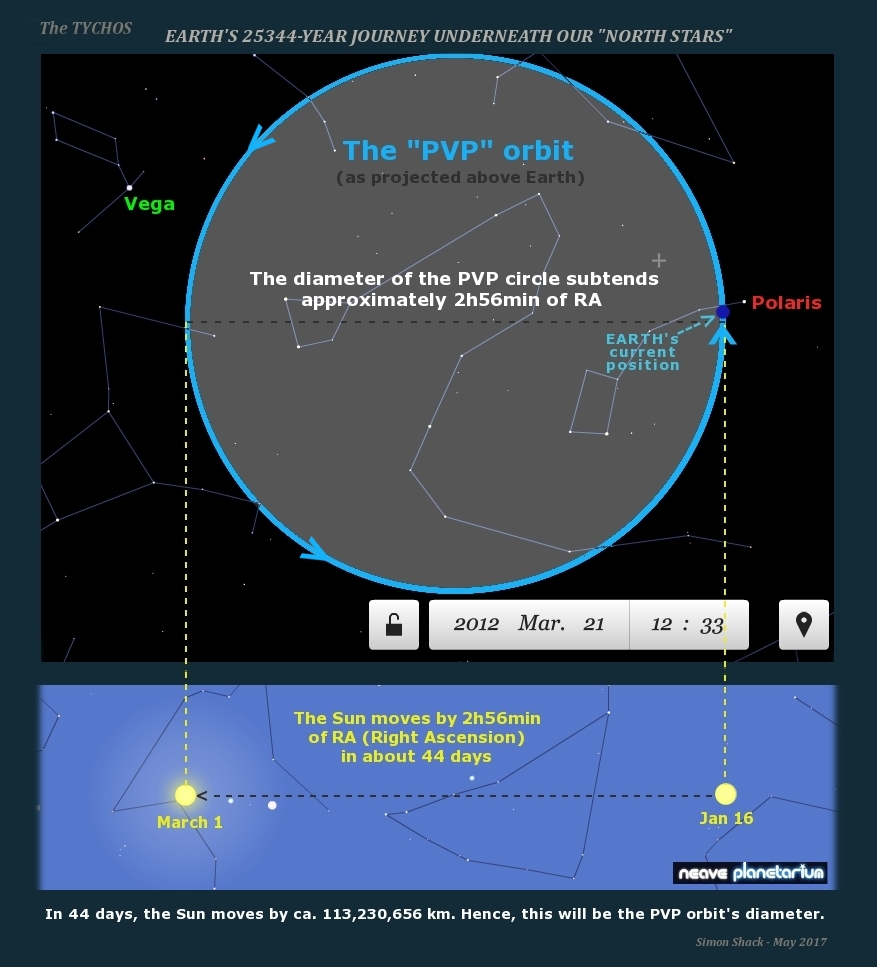 Perusing the NEAVE Planetarium, we can see that the Sun (as it moves around our 360° celestial sphere) covers a distance subtending 2 hours 56 minutes of RA (Right Ascension) in 44 days or 1056 hours. We can therefore perform a simple calculation to establish the diameter of our PVP orbit. Assuming the Sun travels at 107,226 km/h, in 1056 hours the Sun would cover the distance of:

The circumference of Earth’s orbit from these reliable figures will be:

Now that we know how many hours that Earth will need to cover the distance of 355,724,597 km (the PVP orbit’s circumference), we may compute Earth’s orbital speed:

That’s right: 1 mph. Or about 1.6 km/h. This is Earth’s proposed orbital speed in the TYCHOS model.

“By Jove! Could our dear old Mother Earth be tranquilly strolling around at window-shopping pace?”

My very first thoughts – soon after computing Earth’s languid speed around its PVP orbit – was the following: has all of life on Earth, perhaps, been facilitated by this sluggish, snail-paced motion of our planet? Could this exceptional slowness graced to Earth (almost, one imagines, “stuck” at the barycenter of the Sun-Mars binary system) be a key prerequisite, along with water, photosynthesis, etc., for biological life as we know it to blossom on any given planet? Moreover, isn’t this serene situation enjoyed by our planet rather reminiscent of a ship gently circling around the calm zone in the eye of a cyclone? And do not the slow winds in the eye of a storm tend to circle in the opposed direction of the cyclone itself, much like Earth would do in the TYCHOS model?

For now though, let’s leave my philosophical musings aside and proceed to put our posited orbital speed of Earth (1.6 km/h or 1 mph) to the test — in methodical fashion. As we proceed one step at the time, we shall see that Earth’s 1-mph-motion around its PVP orbit effectively resolves, one by one, all of the extant mysteries (or “known unknowns”) of our neighboring cosmos (a.k.a. our Solar System).

Those familiar with the infamous Michelson-Morley experiment, billed as the most failed scientific experiment of all time, may begin to sense that the TYCHOS model might yet vindicate the same. The experiment’s objective was to try and measure Earth’s velocity across space (or through the “aether”, a universal medium in which all things are situated in absolute space). Of course, the expected speed of Earth was something in the region of 107,000 km/h, yet nothing of the sort was found. Instead, to everyone’s surprise, Michelson (et al) only detected some minuscule “near-zero” (or perhaps even “negative”) velocity. Here is what we may read in astronomy literature:

As you can see, not only did Michelson conclude that Earth’s speed had to be quite small, but he even “thought of the possibility that the solar system as a whole might have moved in the opposite direction to the Earth”. In hindsight, both of those assertions would seem to be congruent with the TYCHOS model ‘s proposed, snail-paced 1-mph motion of Earth, as it moves in the “opposite” direction of our solar system. In any event, the many successive similar interferometer experiments performed by numerous other scientists all failed to detect speeds anywhere near the presumed orbital speed of Earth (107,226 km/h or 30 km/sec). The speeds detected, if any, were deemed to be so small as to be “negligible” and were thus dismissed as probable instrument errors. Otherwise, they were deemed to be null or, in any event, completely invalid as proof for Earth’s supposed hypersonic speed.

Now, supposing that the Sun were circling around Earth’s smaller PVP orbit, it would complete ca. 66,967.3 orbits in the same time that Earth (moving at 1.6 km/h – or 1 mph) would complete a single orbit. However, since the Sun isn’t circling Earth’s PVP orbit, but around its own solar orbit (which is 2.642336 X larger), we divide this factor with the Earth-Sun orbital size difference – so as to reconfirm the number of solar orbits that the Sun will complete when Earth completes a single orbit:

Ergo, as Earth completes 1 orbit in the PVP, the Sun will complete 25344 solar orbits.

Note that we have now found the 25344-year value for the Great Year via a wholly separate avenue than that of our previous method, which was a reasoned induction based on the cycles of Mars, Venus, Mercury and the Moon, and their orbital resonances.

Some SUN data (as of the TYCHOS model):

The Sun employs ca. 365.25 days to complete one revolution around its orbit.

Some EARTH data (as of the TYCHOS model):

Earth employs 25344 years to complete one revolution around its PVP orbit.

It is located at the (slowly rotating) barycentre of the Sun/Mars binary system.

The Importance of the PVP Constant

As we will see further on, this PVP CONSTANT will prove invaluable as we proceed, putting the TYCHOS model to the test. We now have a value constituting a relative speed ratio between the Sun and Earth. Thus, we may finally put to rest that age-old dilemma: “orbital speed in relation to what object / frame of reference?”

We can now work with an empirically testable Sun-Earth velocity ratio. To be sure, that is not the same as stating (as current theory does) that, “The Sun hurtles around the galaxy at 800.000 km/h, along with all of our system’s planets – while Earth revolves around the Sun at 107.226 km/h.” in the absence of any observational indication in support of such hypersonic speeds. One may well say that these outlandish orbital speeds upheld by Copernican theorists have been an offense to human intelligence all along, since this would mean our entire system travels in excess of 7 billion km each year while the stars hardly appear to move at all.