I vividly encourage everyone to peruse and get familiar with the TYCHOSIUM 3D interactive planetarium. It can safely be asserted that it is currently the only existing planetarium fully consistent with astronomical observations and physical reality.

The interactive TYCHOS PLANETARIUM — henceforth, the “Tychosium” — was conceived around the TYCHOS model’s principles in mid-2017 and gradually came to life by the end of that year. It is a joint effort by yours truly and Patrik Holmqvist, a Swedish IT programmer I had the good fortune to meet in the summer of 2017. We are both satisfied that the Tychosium 2-D that resulted from our collaboration represents the most accurate digital simulator ever devised of our “Solar System” which, as the TYCHOS model has determined, is a binary system similar to most (or perhaps ALL) of our surrounding star systems. The Tychosium 2-D conforms to all our known and verifiable real-world principles of physics, optics and geometry known on Earth, unlike those proposed by the otherworldly and unphysical Copernican model.

Here is a screenshot of the first working version of the Tychosium 2-D which was completed in early 2018: 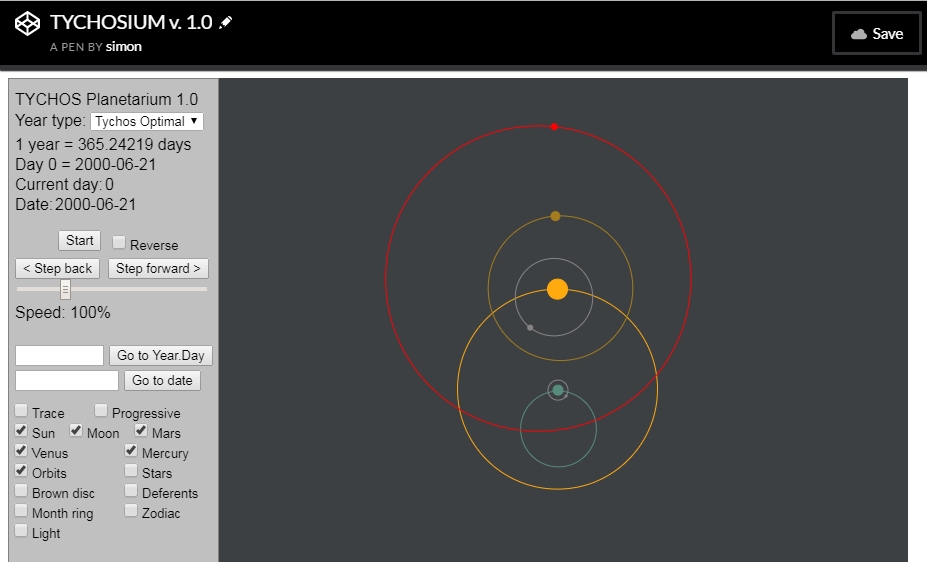 Back in 2015, as I attempted to visualize the basic orbital structure of my nascent TYCHOS model, I tentatively composed the below graphic as a way of clarifying for myself how exactly our system’s bodies would interact over a Great Year of 25344 years. The early, tentative graphic has nonetheless held the test of time and cross-verification, well beyond my wildest expectations. 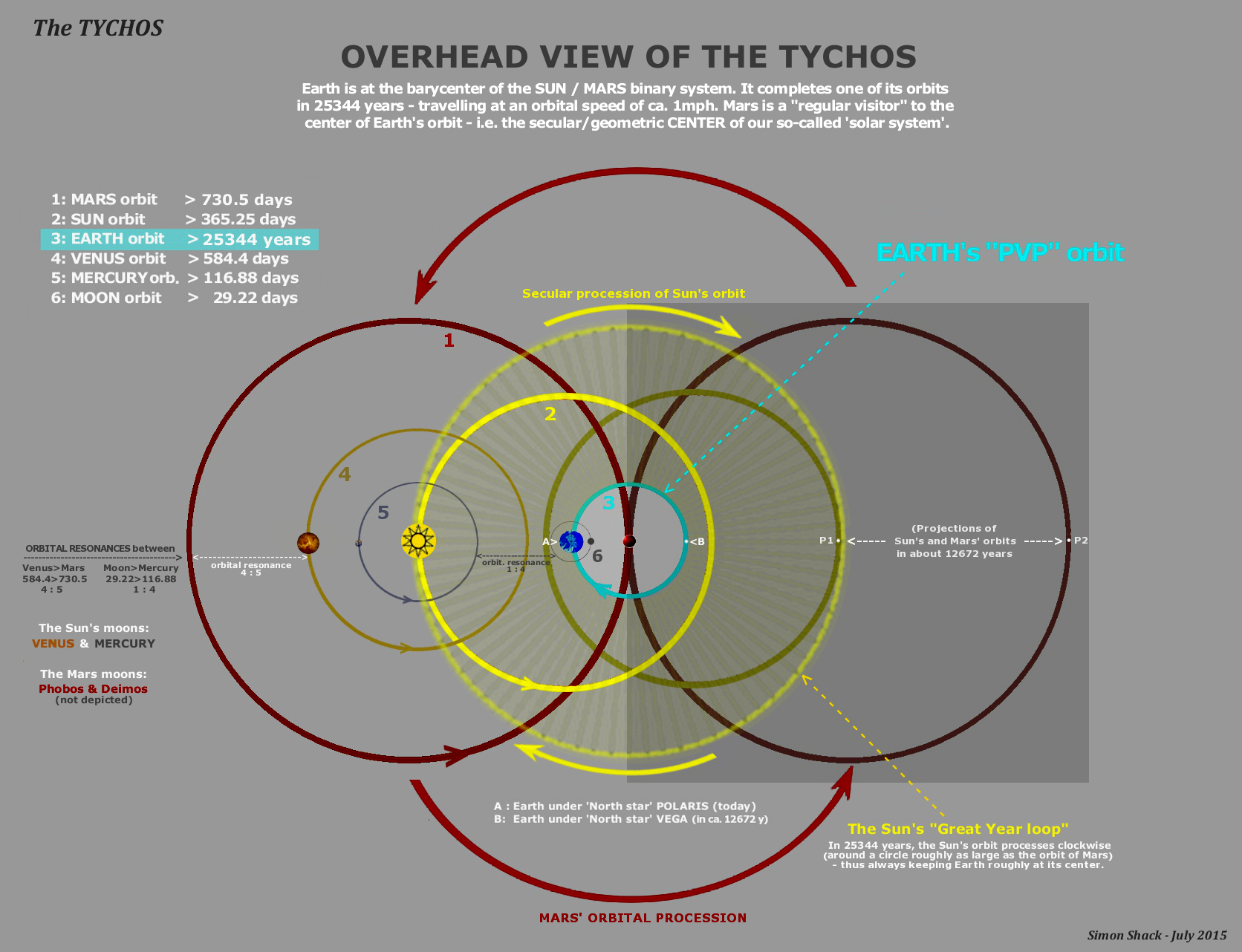 To come to terms with the notion of what I call the “secular / geometric center of our system”, one must envision the full processional motion of our entire system over 25344 years (i.e.; one Great Year). We see that, in the TYCHOS, Mars periodically transits (during its closest oppositions) at about 56.6 Mkm from Earth (i.e.; “smack in the middle” of Earth’s 113.2-Mkm-wide PVP orbit). This means that Earth doesn’t revolve around any physical celestial body — but only around this “virtual secular center” regularly visited by Mars.

As I made the above graphic (“Overhead view of the Tychos”) in July 2015, I remember daydreaming about what I feared would be a far too ambitious project: to construct an interactive motion graphics planetarium which would faithfully simulate the entire TYCHOS system. Yet, to my delight, the Tychosium has now became a reality thanks to Patrik’s invaluable help, ingenuity and programming skills. It is essential to realize that the planetary data used to create the Tychosium (orbital speeds, dimensions, periods, etc.) is in full agreement with long-established astronomical observations.

Utmost care has been taken to respect all available values and tables perfected and verified over the centuries. In other words, the Tychosium represents a proof of concept of the TYCHOS model, since past and future planetary positions are in full accordance with observation. Most significantly, it is incontestably superior to any existing planetarium showing an overhead view of our system (e.g.; the Scope planetarium). This, because its geometry correctly predicts all planetary conjunctions with the stars, unlike the utterly nonsensical Earth-planet-stars “alignments” proposed by the unphysical Copernican cosmic geometry (see Chapter 7).