Earlier on, we saw that Earth’s PVP orbit is 2.642336 X smaller than the Sun’s orbit. We shall now see how Earth’s 1-mph-motion can, all by itself, account for the famed “precession of the equinoxes”, currently estimated to last for circa 25 to 26 thousand years.

Here is what we obtain: 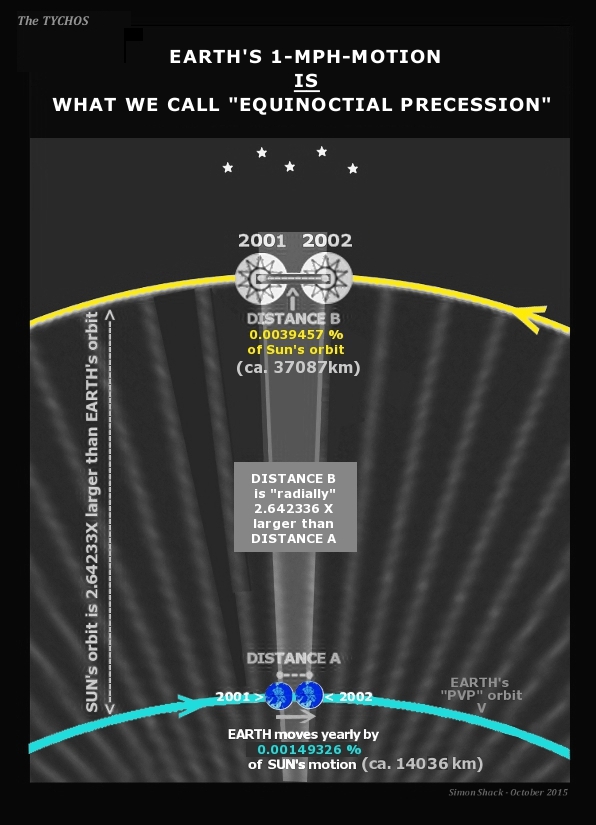 Hence, it logically follows that the so-called “equinoctial precession” (the observed lateral drift which constantly shifts the Earth-to-Sun-to-Stars alignment) is a direct consequence of Earth’s clockwise 1 mph-motion around its PVP orbit.

Further on, we shall see how our current Gregorian calendar count tries to compensate for this inconvenient offset. This will ultimately (over millennia) generate some serious problems with regards to the seasonal Earth-Sun-Stars alignments. In its attempt to compensate for Earth’s slow yet inexorable motion around its orbit, the Gregorian calendar’s less-than-ideal year count will cause our system (in 25,344 years of 365.24219 days) to end up “upside-down” in relation to the stars. This will, given due time, “invert” the seasons. It is a wrong way to track time, and should be thrown out.