Astronomers have long known that — every 2000 years or so — the entire star field will drift (Eastwards in relation to Earth’s equinoxes) by about one of the 12 zodiac constellations. In the TYCHOS, this is naturally caused by Earth’s slow, 25344-year-long circular journey. In short, what we call precession of the equinoxes is just a direct consequence of Earth’s 1 mph motion around the PVP orbit.

“At present, signs and constellations are about one calendar month off. In another 2000 years or so, they’ll be about two months off.”

— What is the zodiac? by Christopher Crockett (2016) for EarthSky

This very slow backward motion of the stars was discovered by Hipparchus as long ago as the second century BCE.

“Hipparchus was the first person to notice the earth’s precession. He did this by noting the precise locations stars rose and set during equinoxes – the twice yearly dates when night length and day length are exactly 12 hours.”

“Some time around the middle of the second century BC, Hipparchus discovered that the fixed stars as a whole gradually shifted their position in relation to the annually determined locations of the Sun at the equinoxes and solstices […] Otto Neugebauer argued that Hipparchus in fact believed that this [36,000 years] was the maximum figure and that he also computed the true rate of one complete precession cycle at just under 26,000 years. […] Ptolemy has been accused of committing scientific fraud by making up observations that would give the figure of 36,000 years even though the data available to him were good enough to get very near the true figure of 26,000.” 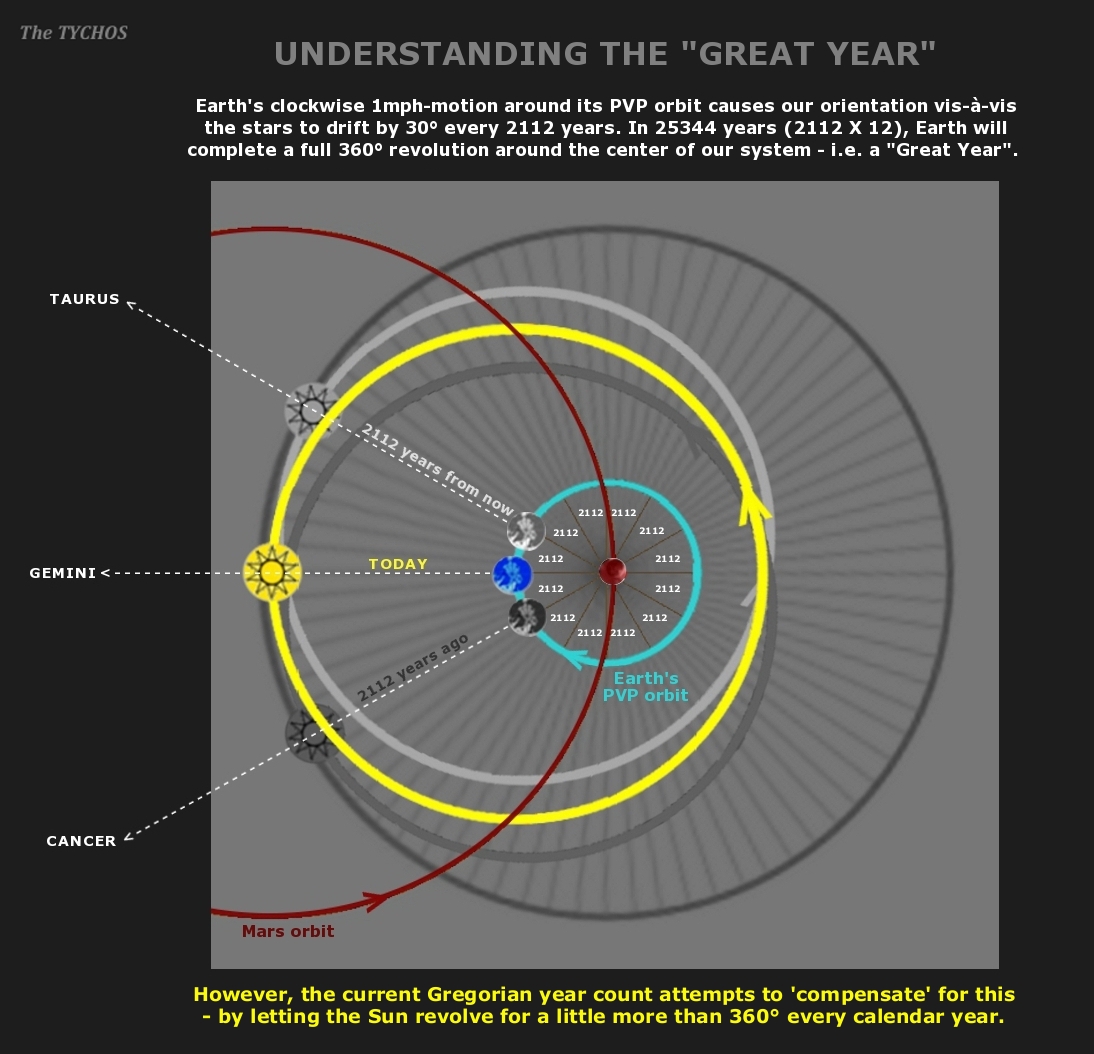 The exact duration of the Great Year (a.k.a. “Annus Magnus”) has, to this day, never been determined with any degree of certainty. This, because the observed rate of precession keeps increasing (by minimal amounts) over the centuries — to every astronomer’s perplexity. There currently exists no explanation for this vexing cosmic mystery which is compounded by the fact that the rate of increase of this drift is observed to grow exponentially. Of course, tentative explanations abound yet none offer more than speculative theories based on so-called “gravitational perturbations”, “tidal friction effects” and other such entirely hypothetical factors.

Further on, we shall see why the year count of our current Gregorian calendar ultimately reverses this natural, stellar & zodiacal precession due to its slightly inflated year count. For now, let’s see how the TYCHOS model’s 1-mph-motion of Earth can be shown to be directly responsible for the observed exponential increase of our “equinoctial precession”.

Why does the observed rate of “equinoctial precession” appear to increase exponentially?

Astronomers have long been puzzled by the observed non-linear increase of the stars’ West-to-East precession rate. Many have tried to quantify the exact amount of annual precession increase, only to find that the rate of increase (from one century to the next) isn’t linear, but exponential. For instance, Simon Newcomb offered (back in the 19th century) a constant of annual precession-rate increase of 0.00022″-per-year. Over time, however, this “constant of precession” soon proved to be a misnomer since it wasn’t constant at all! In fact, ever-higher rates of secular increase of the so-called “equinoctial precession” were successively observed.

As Walter Cruttenden (of the Binary Research Institute) points out:

“The constant seems to work for a while until a close examination of the precession observable shows it is increasing at an exponential rate, outstripping the fixed constant. Thus the equation, even with an annual addition falls a little farther behind each year.”

My below graphic shows how the TYCHOS accounts for this observed, exponential increase of the observed rate of precession. 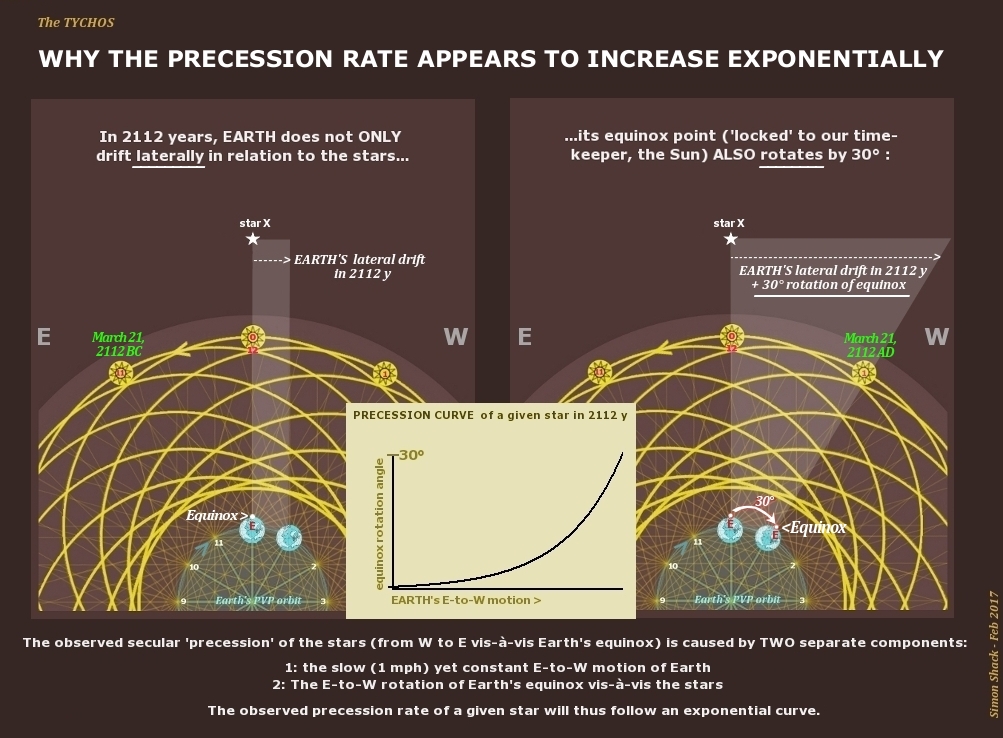 The rate of increase is naturally exponential because it is caused by two separate, cumulative components:

1. The East-to-West motion (the lateral displacement) of Earth vis-à-vis the stars

2. The East-to-West secular rotation of Earth’s equinox vis-à-vis the stars

As it is, this observed secular increase of the stellar precession is intimately related to the apparent accelerations and decelerations of the motions of our Moon & Sun — and goes to resolve a string of longstanding and still hotly-debated riddles of astronomy:

• The apparent secular decrease of the length of the tropical year

• The apparent acceleration of the Moon’s orbital speed.

• The apparent secular increase of the length of the sidereal year

“Astronomers who studied the timing of eclipses over many centuries found that the Moon seemed to be accelerating in its orbit, but what was actually happening was that the Earth’s rotation was slowing down. The effect was first noticed by Edmund Halley in 1695, and first measured by Richard Dunthorne in 1748 — though neither one really understood what they were seeing.”

— Ask an Astronomer: Is the Moon moving away from the Earth? When was this discovered? (July 18, 2015, Cornell University)

My below graphic shows that, under the TYCHOS model, all four of these apparent secular variations are part of the same effect of perspective. They are caused by the gradually expanding angular shift between Earth in relation to the Sun, our Moon and the background stars. Of course, under a heliocentric model, no such angular shift would be expected, since Earth is believed to revolve around the Sun — and not vice versa. Hence, a Copernican astronomer won’t make any sense of it and will reach the wrong conclusions.

The question of the Moon’s apparent secular acceleration (and the apparent deceleration of Earth’s rotation) was a major debate back in the days. In 1764, Roger Long published his second volume of Astronomy, in which he discussed at length about those thorny issues.

No firm explanation has been put forth for what causes these apparent variations of the Earth’s and the Moon’s orbital and/or rotational speeds. Astronomy literature offers very frail theories (and unending flame wars) about the so-called “non-gravitational effects” which would account for the observed phenomena. Astronomy historian John Phillips Britton remarked in a 1992 essay that the Moon’s acceleration,

“was proving an embarrassment to theoretical astronomers, since no gravitational explanation for this phenomenon could be found.”

— p. 153, “Appendix I. Secular accelerations of the Sun and Moon”, Models and Precision: The Quality of Ptolemy’s Observations and Parameters by John Phillips Britton (Garland, 1992)

Eventually, astronomers turned to geologists for assistance and — for a while — some sort of mad consensus was reached that it all had to do with “tidal friction forces” that would somehow slow down Earth’s rotation as well as speed up the lunar motion! However, in the introduction to his academic paper “Non-gravitational Forces in the Earth-Moon System”(1972), Robert Russell Newton (famed for his extensive work on the apparent changes of Earth’s rotation rate and expertise about lunar eclipses) curtly states in the abstract:

“There are no satisfactory explanations of the accelerations. Existing theories of tidal friction are quite inadequate.”

Further on in his paper, R.R. Newton concludes:

“We are seriously lacking in mechanisms to explain the non-gravitational forces. The only mechanism of tidal friction (the ‘shallow seas’ model) that has been evaluated quantitatively provides only one-fourth of the necessary amount of friction, and it does not provide for much change with time within a period as short as historic times.”

In the TYCHOS model (as shown in my above graphic), these perceived accelerations & decelerations of the Moon and Earth are illusory and only a matter of inverted (geocentric/heliocentric) spatial perspectives. The Moon’s revolution isn’t speeding up — nor is Earth’s rotation slowing down. All such observations are, of course, closely related to the above-expounded secular increase of the equinoctial precession. Most significantly, in a 1932 astronomy paper, J.K. Fotheringham provided this precious piece of information:

In other words, the Copernican astronomers who vividly debated about the Moon’s puzzling, apparent secular acceleration were measuring the Moon’s motion against the starry background and not in relation to Earth’s equinoctial points! Thus, they never envisioned the possibility of an illusory acceleration caused by the clockwise motion of the Earth-Moon system, slowly curving in space against the starry background. Nor did they, of course, ever consider the Sun revolving on an external orbit around Earth.

As we saw earlier, Copernican theorists attribute the ca. 25,500-year precession of the equinoxes (which is really the “Great Year”) to the supposed wobble of its axis (recall Chapter 18 on the fully-disproved Lunisolar theory). Now, if this were the case, why then would Mars exhibit a “Great Year” of its own – and almost precisely twice as long (namely, 51,000 years)? What sort of cosmic sympathy could possibly cause Mars’s equinoxes to precess at a 2:1 ratio with Earth’s equinoctial orientation vis-à-vis the Sun, unless the harmonic relationships proposed by the TYCHOS are true?

The fact that the Martian equinoxes precess in about 51,000 years (roughly two Great Years) would be entirely expected under the TYCHOS model paradigm since our two main binary companions are locked in a 2:1 orbital ratio. Mars will quite naturally employ twice as much time to complete its own equinoctial precession.

“The Martian equinoxes also precess, returning to an initial position over a period of about 51,000 years.”

“The season of perihelion follows the ~51,000-yr Martian obliquity cycle; the hemisphere receiving maximum insolation (currently the southern hemisphere) will reverse every ~25,000 years.”

“As a combined effect of the precession of the spin axis and the advance of the perihelion, alternate poles of Mars tilt towards the Sun at perihelion every 25,500 years – that is, on a 51,000-year cycle.”

As you can see, the body of evidence in support of Mars having a binary relationship to the Sun is overwhelming.

As of the best astronomical observations, Mars appears to rotate once around its axis every 24 hours 37.5 minutes. Earth’s sidereal day is 23 hours 56 minutes. This is a difference of 41.5 minutes. In the Copernican model, Mars is just one of various planets revolving around the Sun. Why would its axial rotation period almost, yet not quite, match that of Earth’s?

Could Mars’s rotation around its axis also be, in actuality, synchronous with Earth’s rotation? Let’s see if we can find any indications in support of this hypothesis.

Since the orbit of Mars is 4.034266 X larger than Earth’s orbit, this will radially correspond to a slice of Mars’s orbit equal to:

This means that Mars and Earth both rotate around their respective axes in 24 hours.

In the Copernican model, such a near identical rotational period could only be ascribed to an odd coincidence.

In my below graphic, we can see why Joe (in 2003) will conclude that Mars rotates around its axis 41.5 minutes slower than Earth. 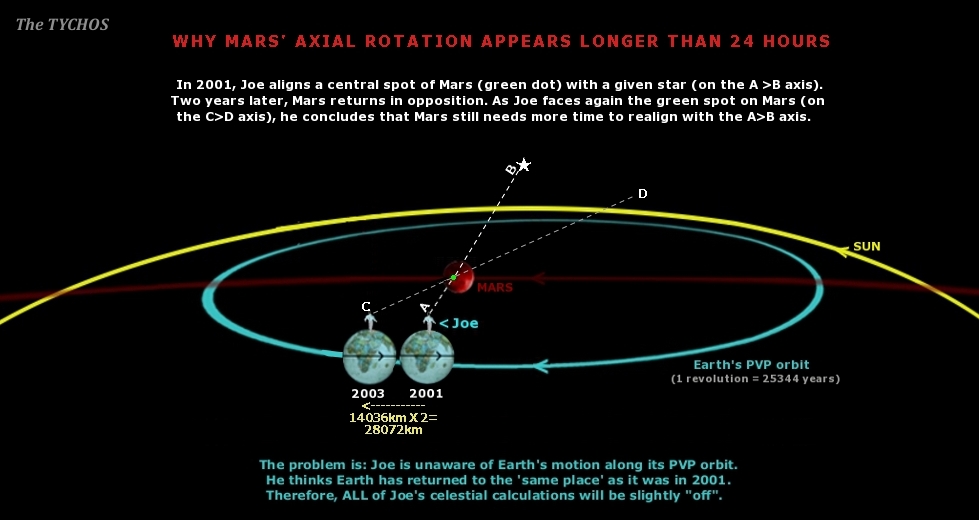 The Martian markings that indicate Mars’s geography are being seen from another angle after 2 years, but Mars has indeed returned to the same rotational orientation in space as it was two years earlier.

Hence, and in conclusion, Mars most likely rotates around its axis in the very same time as Earth: